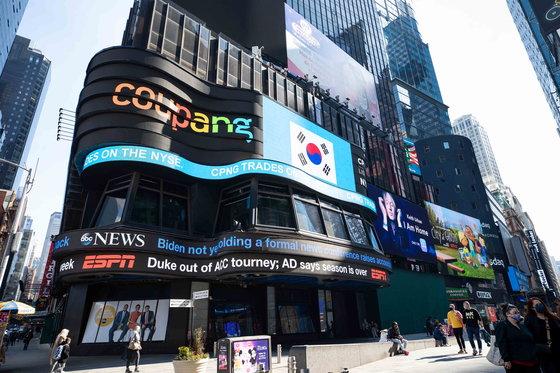 
Coupang is under pressure from Korea's largest e-commerce company and its partners as they roll out promotions in an effort to prevent the newly-listed rival from gaining market share and becoming dominant.

They are hitting Coupang where in counts, threatening it both on the sales and sourcing sides of the business.

On April 2, Coupang started offering free delivery to all customers, including non-members, regardless of the size of the order. This was previously only available to members, who pay 2,900 won ($2.5) a month.

Before, non-paid users had to spend at least 19,800 won per order to enjoy free delivery.

As of late last year, Coupang had around 4.75 million paid users and 14.85 million active users.

Coupang, the second-largest e-commerce company in Korea after Naver, said the promotion targets price-conscious users who are unhappy about having to buy more to qualify for free delivery.

The promotion is temporary, but the company did not reveal when it would end.

Following Coupang's aggressive promotions, rivals are offering their own promotions.

Last week, Emart vowed to match any price on Coupang, compensating customers if they bought something at Emart that is cheaper on Coupang. The price-match guarantee is also good for the online malls of Lotte Mart and Homeplus.

Compensation will be paid in points, up to a maximum of 3,000 per day, where 1 point equals 1 won of purchasing power at the store. The points must be used in 30 days.

The goal is to become Korea's go-to daily necessity seller "by attracting more customers to offline stores and assuring customers that they will be getting the lowest price," said Nam Chan-hyeon, a spokesperson for Emart. 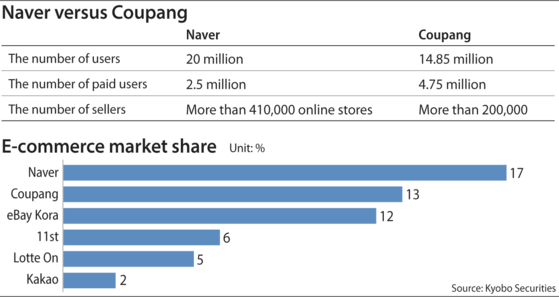 Naver, the largest e-commerce player in Korea, is aggressively courting merchants by paying them 100 percent on sales made on Naver Smart Store the day after a product has been delivered. Naver Financial said the merchants will have to meet certain criteria to qualify for the extra-fast settlement.

The criteria include having sold more than a million won of merchandise for three consecutive months.

"Rivals are busily taking action before Coupang dominates the market," said Kim Yong-jin, a professor who teaches management information systems at Sogang University. "They are feeling the tension and are offering services that have not yet been provided by Coupang."

"Naver has achieved convenience and delivery speed on par with Coupang through its partnership with CJ Logistics," Kim said, adding that Naver could provide next-day delivery nationwide, just like Coupang, once it starts utilizing the logistics facilities operated by Emart and its offline stores.

Naver swapped shares with Emart last month and with CJ Logistics in October and the three companies are working together to create an e-commerce powerhouse.

In 2020, Naver had 17 percent of the e-commerce market in Korea, Coupang 13 percent and eBay Korea 12 percent.