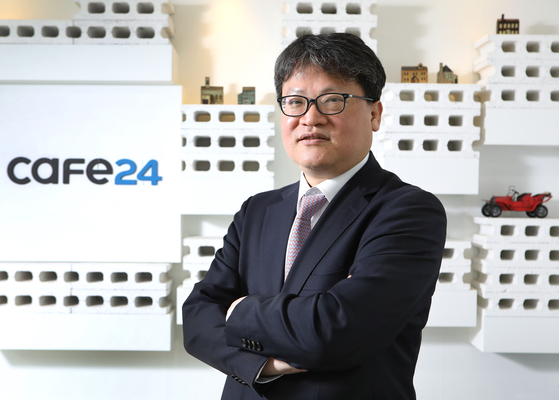 Cafe24 CEO Lee Jae-suk talks about the company's 20 years in online shopping during an interview with the Korea JoongAng Daily on April 22, at Cafe24's headquarters in Dongjak District, southern Seoul. [PARK SANG-MOON]


E-commerce in Korea hit a milestone in 2019 when the amount of credit card spending online, 256 billion won ($207 million), outpaced spending at brick-and-mortar stores, 224 billion won, according to the central bank.

The history of e-commerce in Korea dates to the late 1990s and a dotcom boom backed by government funding. In its early years, online shopping was mostly about fashion. Today, it’s about everything — from major appliances to fresh vegetables delivered to your doorstep the very next morning.

Established in 1999, Cafe24 has been part of that growth from the very start.

Its name may be obscure, but any person who’s bought something from a Korean online shopping website has used its service. The company provides IT services for online shopping malls — including website hosting, operations support, marketing or branching out overseas.

Cafe24 calls itself a “one-stop center” for anyone who wants to launch an online business. It offers free website hosting. But other services on top — like website design, customer service, translation or consulting — are charged. 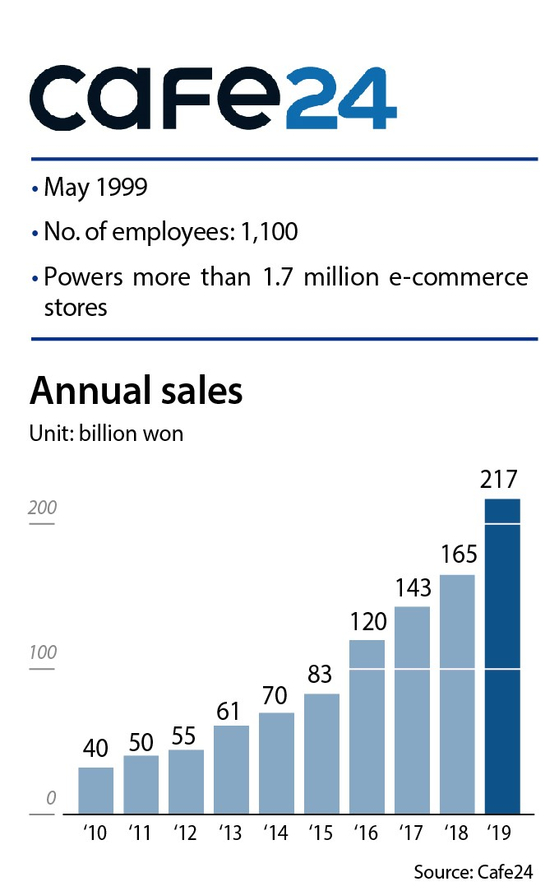 More than 1.7 million online shopping websites have been created on Cafe24’s platform so far. Its oldest clients include big e-commerce fashion names like Stylenanda, Hotping, Miamasvin and 66girls, all of which have grown into mid-sized businesses with customers overseas. The company is also an e-commerce partner of IT powerhouses like Facebook, Kakao, China’s Tmall and Japan’s Rakuten.

Despite all this progress, Cafe24 CEO and founder Lee Jae-suk still believes e-commerce still has room to disrupt the way people shop.

“Shopping is not just about purchasing something you need; it’s about joy and excitement," Lee said in an interview with the Korea JoongAng Daily. "Shopping malls and outlets have a lot of stuff; they offer a fun experience as well. E-commerce has much more stuff, but it’s not fun. In that aspect, online shopping still has a long way to go.

“Now that 5G is here, the issue of internet speed will be solved and e-commerce will adopt technologies like virtual reality, artificial intelligence and 3-D visuals. Online shopping will eventually fulfill that enjoyment aspect in shopping, which in the past was only offered via brick-and-mortar retailers.”

Below are edited excerpts of Lee’s interview.

Q. Tell us about Korea’s e-commerce experience of the past two decades.

A. It didn’t grow as fast as I expected. About 10 years ago, I used to say the e-commerce scene would grow because it allows people to buy what they want at a much faster speed. But in reality, this wasn’t true. At brick-and-mortar stores, you visit, look around and pay for your goods on the spot. On online websites, people spend hours, even days, to click that purchase button. The internet was fast in theory but the user experience wasn’t simple enough. What brought the big change was smartphones. The mobile interface actually made the online shopping experience much simpler and more convenient from the user’s perspective. From there, the industry really took wing.

Q. Cafe24 offered solution hosting for free from the very start and charged fees on additional IT and consulting services. That itself would have generated substantial revenue. Why did you decide not to charge?

A. It was an investment. I never had doubt in the market’s potential. And because of this confidence, I was able to tell clients that the company would pay for the initial cost; to take a part of their risk. In exchange, they could pay us once their business got bigger. We’ve had people oppose this policy, but back then it was a strategy to expand the entire market. In any business field, if the market gets bigger, the demand for relevant services grows as well.

Q. A decade ago, online shopping was mostly about fashion. Today, the scope of products sold online is much wider. What is the future of e-commerce in Korea?

A. A big trend in our society today is laziness. E-commerce allows people to shop at home by using their fingers. They first experienced this with a limited pool of items, realized how convenient this system is and gradually widened the scope of products they purchased online.

But e-commerce still has a long way to go. Shopping at a mall or an outlet is a joyful experience. E-commerce offers a much larger pool of products, and yet it’s not fun. We’ll need a lot of technology for virtual reality to mimic the enjoyment people feel from brick-and-mortar retailers. 3-D technology has been around for some time, but it was never put to practical use. But 5G networks will mark a new start in finding a breakthrough.

A. It solves the speed issue. The 5G network serves as the infrastructure for interactive content. In technical terms, though, we’re not quite there; however, I don’t think it’ll take long. Artificial intelligence will come and resolution technology will improve as well to a point that the visuals shown on a digital screen become very close to what we see with our bare eyes. It’s hard to pinpoint when that moment will arrive, but we’ll surely get there — like how autonomous driving features are gradually increasing in vehicles.

Q. I feel in Korea, the presence of online shopping malls run by individuals is larger than in other countries. Are there any characteristics specific to Korea’s e-commerce scene?

A. There are a lot of players competing in the market. As you said, in most countries, there are one or two e-commerce leaders that dominate the market, like Amazon, China’s Alibaba or Japan’s Rakuten. But in Korea, smaller shopping malls founded by individuals take up a large portion of the e-commerce scene. I think this is because Koreans tend to have strong individual taste for style or specific hobbies, which different shopping malls can specialize in.

Q. Expanding overseas has been a core focus of Cafe24’s business, and you’ve launched services in Japan and Southeast Asia. What opportunities do you see overseas?

A. Our goal overseas is essentially to implement that same business model in other countries. But at the moment, we mainly work with big corporate clients. But small online businesses exist anywhere. Most governments around the world are also dedicated to fund these businesses as well. We’re aiming for a pretty general target.