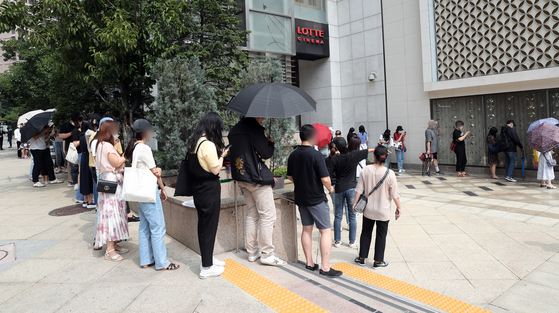 
Shoppers rushed to department stores to purchase Chanel bags on Wednesday amid rumors that the brand will sharply raise prices from July 1.

Concerns about Chanel sticker shock caused some people to queue overnight outside department stores, lining up late on Tuesday ready for doors to open on Wednesday morning.

“Usually, there are people waiting in a queue in front of the department store, but it seems like two or three times as many people are in line today. It's been like this since Monday," said Lotte Department Store spokesperson. “I heard that some customers were in line from Tuesday night.”

The rush comes after rumors that the French luxury fashion brand will raise prices of some popular items starting from July spread online. According to the rumors, which reportedly came from sellers at Chanel stores in the United States and Europe, a 12 percent increase will be applied to popular handbags including the Chanel Classic Flap Bag, Chanel 19 Bag, and Wallets on Chain Bag.

That’s a price hike more than twice as big as the brand's normal annual adjustment. Chanel generally raises the prices of some items by 3 to 5 percent annually.

Customers believe that if Chanel raises price in foreign countries, they will inevitably increase in Korea as well.

Chanel Korea, however, declined to confirm the price increase.

The price of the Classic Large Flap Bag will exceed 10 million won with the price rise.

For some shoppers, luxe is worth the wait

What would Coco think? (KOR)