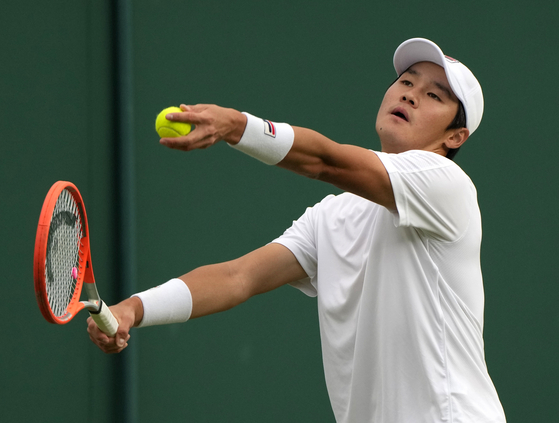 Kwon Soon-woo serves to Germany's Daniel Masur during the men's singles match on day one of the Wimbledon Tennis Championships in London on Monday. [AP/YONHAP]


Kwon Soon-woo picked up his first ever win at Wimbledon on Tuesday, beating Daniel Masur of Germany in a two-day match at All England Lawn Tennis Club in Wimbledon, London on Tuesday.

This is Kwon's second time at Wimbledon, having lost to Karen Khachanov in the first round in 2019.

The first set was played on Monday with the German defeating Kwon 7-6 after a tie-break. Rain and then nightfall caused play to be delayed, with the match unable to resume until Tuesday.

Kwon seemed to have figured out his opponent over the break, as he was serving aces and putting pressure from the start on Tuesday.

In the second set, Kwon and Masur each took their serve games twice, with Kwon then breaking Masur's serve to take a 4-2 lead that allowed him to take away the set 6-3.

Kwon was on fire, breaking Masur's serve as soon as the third set started.

Masur was showing a weakness in his forehand and Kwon was able to take advantage of this, turning the tide completely to his side, as he was able to bring the set to 4-2 in just 20 minutes.

But the German wasn't giving up just yet and the set went to 5-4. With just Kwon's serve game to win the set, Kwon's double fault brought the score to 30 all, but an unforced error from the German ended the game.

Kwon opened the fourth set breaking another of the German's serves, before capitalizing on his own serve to take an early lead.

At 30-15 in the second game, Masur challenged a call, claiming that Kwon's ball was out. The VAR called in Kwon's favor and the Korean took a 2-0 lead.

Just when it seemed that the match would soon finish in Kwon's favor, the match was suspended a second time due to rain.

Four hours later, Kwon was back for the rest of the last set, repeating his dominance over the court despite worries that the delay might have put an end to his luck.

Winning three straight sets in a row, Kwon picked up his first ever victory at Wimbledon in 2 hours and 34 minutes, over two days with two delays.

The match demonstrated the importance of strong serves on the faster grass court. Kwon had 14 aces to Masur's 10.

Kwon will next face Dominik Koepfer of Germany on Wednesday at 11 a.m. local time, or 1:30 a.m. on Thursday in Korea.