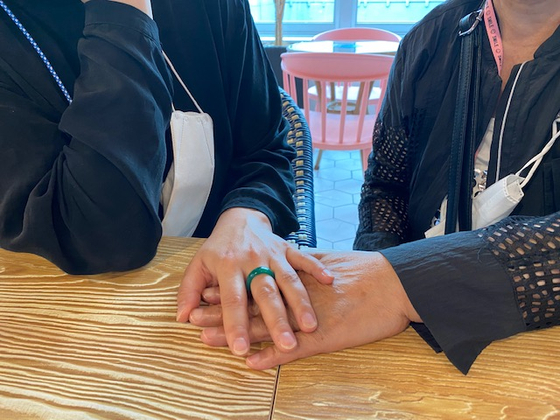 Sun Hee Engelstoft, a Korean-Danish filmmaker and Korean adoptee to a Danish family, holds hands with a woman surnamed Lee, who is looking for her adopted daughter, in a cafe in Daegu on June 24. [NATIONAL CENTER FOR THE RIGHT OF THE CHILD]


Two women sat across from each other at a coffee shop in Daegu on June 24. One was in desperate search of her daughter she had given up 42 years ago. Another had flown in from Denmark after decades of living there as a Korean adoptee.

“I don’t want you to give up searching for your mother,” said a 61-year-old woman surnamed Lee to Sun Hee Engelstoft. “There must be reasons why your birth mother cannot look for you now.”

Engelstoft, born Shin Sun-hee in Busan, was only four months old when she and seven other babies were adopted by families in Denmark in 1982. It has been nearly 20 years since she has been on the search for her birth mother who had signed the papers to give her baby up for adoption.

Her birth mother, who signed her name as Shin Bok-sun, was 19 years old at the time — the same age that Lee was when she gave up her baby at a hospital around 1980.

Lee, who became pregnant at the age of 18, gave up her daughter for adoption upon birth the next year, due to pressure from her family. She and her boyfriend at the time never got married.

Lee said she signed the papers only to give consent, but didn’t sign with her real name, according to the National Center for the Right of the Child, a government-run center that conducts DNA testing and provides support for adoptees and adoptive parents.

“I regret it very much,” Lee said, according to the center. “If I had signed my own name on the adoption paper, it would have made things much easier in finding my daughter.”

To this day, Lee’s daughter and the fact that she gave her up for adoption is a secret from her husband and children.

It was on June 1 that Lee saw Engelstoft on a KBS program, where Engelstoft was telling of her ongoing search for her birth mother. Engelstoft has also released a documentary earlier in the year “Forget Me Not — A Letter to My Mother,” which tells the stories of single mothers in Korea and the dilemmas they face in giving up their babies for adoption.

Lee thought Engelstoft looked a lot like her former boyfriend, who is the biological father of her child. She then got in touch with KBS and also contacted the National Center for the Right of the Child.

Although her name didn’t match that of Engelstoft’s adoption papers, the two decided to give DNA testing a go, just in case.

Despite the results, which came out negative, the two felt they still had all the more reason to meet up.

During their meeting, Lee gave Engelstoft her jade ring, offering to act as her mother until Engelstoft finds her birth mother.

“It was a meeting of two people who could comfort each other because of the pasts they carry,” Engelstoft said, according to the center. “I hope that my birth mother, wherever she may be, will find the courage to meet me in person one day.”

Engelstoft also offered to help Lee find her daughter by using her own networks of adoptees. 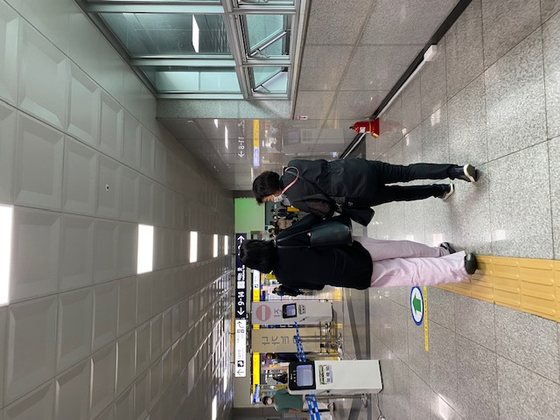 Engelstoft, with Lee, walking in a subway station in Daegu on June 24. [NATIONAL CENTER FOR THE RIGHT OF THE CHILD]


In the search for her birth mother some 20 years ago, Engelstoft had found, with the help of adoption centers and the police, three women named Shin Bok-sun — the name signed in her adoption papers and presumed to be her mother. One of them was found to have given up a baby for adoption. The woman, however, declined to meet Engelstoft at the time.

Engelstoft is one of about 210,000 Korean children who were adopted internationally since the Korean War ended in 1953.