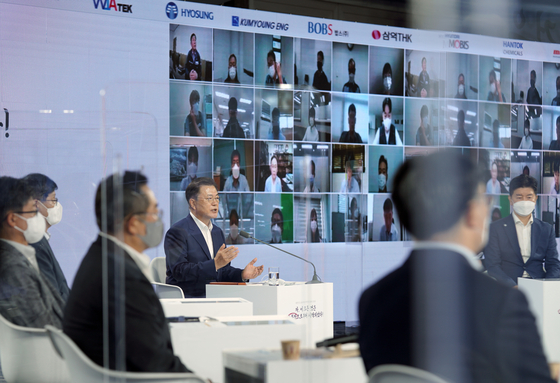 President Moon Jae-in speaks at an event reviewing the outcome of the second year of Japan's export curbs on Korea at Coex in Gangnam District, southern Seoul, on Friday, attended by representatives of the materials, components and equipment sector. [JOINT PRESS CORPS]

Moon said that though Japan’s export curbs targeting the Korean chip and display industry starting July 2019 came as a "surprise attack,” Korea was able to “overcome the crisis” through increasing its self-reliance and diversifying import sources while attending an event to mark the second year since Tokyo’s trade restrictions.

He met with representatives of 58 small- and medium-sized companies at the forefront of Korea’s efforts to produce such material, parts and equipment to respond to Japan’s export curbs, expressing gratitude for their efforts and promising additional support at the event held at the Korea International Trade Association at Coex in Gangnam District, southern Seoul.

The Moon administration at the time responded by saying that Korea will diversify its sources of industrial components and materials to end its reliance on Japan to overcome the crisis.

Moon said in his speech Friday that Korea had turned the crisis into an opportunity, while lowering dependence on Japan for core items, stressing that the “achievement is far bigger and more pronounced than expected.”

Korea’s dependence on Japan for etching gas — or hydrogen fluoride — used for chip production dropped to below 20 percent from around 50 percent in the past two years.

Likewise, Korea has secured its own technology for fluorinated polyimide, an important material for smartphone displays.

Dependence on Japan for EUV photoresists, a key material for the manufacturing of semiconductors, fell below 50 percent.

Moon noted that Korea reduced its dependence on Japan for the top 100 core materials, parts and equipment to 25 percent.

Moon noted that large corporations with demand for components were able to join hands with small- and medium-sized enterprises (SMEs) to localize such core technologies, cooperating from the research and development stage to the mass production process.

He said that the government is ready to support SMEs' efforts to handle international patent disputes.

Lee Jun-hyuk, vice chairman of Dongjin Semichem, said, “The process and experience of overcoming this crisis will become a valuable asset for the localization of materials.”

Dongjin Semichem is the first company in the country to successfully develop and manufacture ArF photoresists, which are at a level of purity below that of extreme ultraviolet (EUV) photoresists.

Chey Tae-won, chairman of the Korea Chamber of Commerce and Industry, said during the event, “If the past two years have been a process of overcoming crisis, now is the time to acquire substantive global competitiveness.”

Shaking off the victimhood