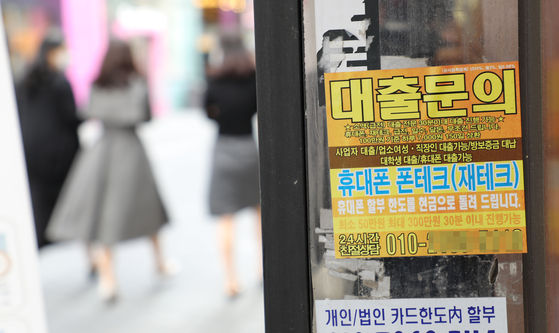 Business cards of illegal loan sharks are stuck at a store entrance in Seoul. [YONHAP]


The maximum interest rate on loans to individuals is being slashed, and this could hurt the very people the government is trying to help.

With the rate coming down to 20 percent from 24 percent, consumer lending companies won't be able to extend credit to those most in need, and Koreans in trouble could be forced to turn to loan sharks.

On July 7, the new cap comes into effect following the passing of an amendment to the Registration on Credit Businesses, Protection of Finance Users and the Interest Limitation Act.

"I need to provide financial support for my family, but I feel hopeless," said a 42-year-old man who had to shut down his restaurant in Ilsan, Gyeonggi, and has been rejected by banks and financial companies for loans.

He works now as a day laborer at construction sites, but his life has become increasingly difficult. He went to second-tier financial firms, such as savings banks, to get loans to cover his rent and living expenses, but they all declined to extend him credit, saying his credit rating was too low.

He then had to turn to illegal loan sharks – money lenders that illegally charges extremely high daily interest rates above the statutory ceiling while not checking borrower's credit scores or history – to borrow 900,000 won ($790). Kim's debt snowballed, and in just five months, he now owes the loan sharks 20 million won.

The change in the law could affect 316,000 people, according to data from Financial Services Commission (FSC). A total of 2.39 million people were using high-interest loans as of March last year, and of them, 13 percent, or 316,000 people, will be unable to access the credit market when the rates come down.

Choi Chul, a consumer economics professor at Sookmyung Women's University, predicts that 570,000 people will be denied loans by private banks and lenders.

"If private lenders stop offering loans due to low profitability, the number of people turning to illegal money lenders will increase – even higher than government expectations," said Choi.

Subprime borrowers with credit ratings of seven or below, on a scale of 1 to 10, frequently borrow from private lenders, as they could take loans at a high but legal rates. But this option may soon disappear. A lower maximum interest rate means low profits and less lending.

"Considering private lenders finance themselves by borrowing money at five to six percent and the money that companies fail to retrieve, 24 percent is the minimum at which we can operate and turn a profit," said a spokesperson for one of the local private lending companies. "Companies could experience losses, and many will stop making loans or entirely shut down."

"With low profits, more private lenders are going to be out of business, which leaves low-credit individuals no choice but to turn to illegal money lenders," said Kim Sang-bong, an economics professor at Hansung University.

Ahead of the implementation of the new amendment, the government plans to prepare countermeasures to help borrowers with weak credit. The FSC, the Korea Communications Commission, the Korean National Police Agency and others held a task force meeting on June 30 announcing they will tighten the crackdown on illegal money lenders from July 1 to Oct 31.

Public loan programs such as Sunshine Loans will be provided to individuals with weak credit at a rate of 15.9 percent. Those currently using high-interest loans will be temporarily provided government-backed loans at 17 to 19 percent.

"The government needs to further increase the number and size of public loans and provide additional support to prevent people with low credit ratings from borrowing money illegally," said Cho Sung-mok, head of the Korea Research Institute for Financial Inclusion.