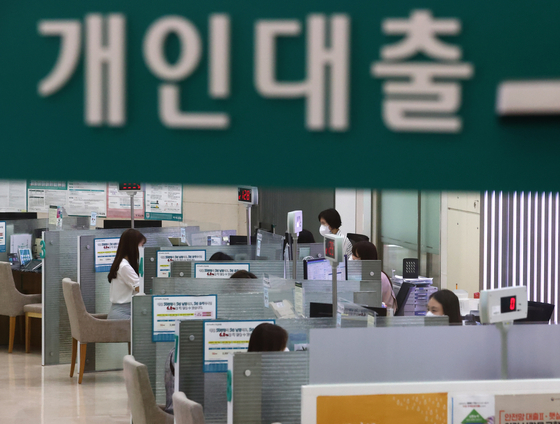 
Borrowers are turning to foreign and provincial banks after the big banks capped unsecured loans to the level of a borrower's annual income.

Mr. Kim, a 29-year-old office worker, recently took out a 40-million-won ($34,600) loan from Citibank Korea. His usual bank refused to go that high, so he turned to Citibank Korea.

“I really needed the money, and I was baffled when the major commercial banks lowered the ceiling on loans,” said Kim. “I looked into foreign and provincial banks after talking to a loan consultant and chose to borrow from one that was able to lend me the biggest sum.”

The Financial Supervisory Service (FSS) in early August asked banks to cut back on lending to curb household debt by limiting loans to the annual income of a borrower. Banks such as Hana Bank and NongHyup Bank quickly complied, while KB Kookmin Bank, Shinhan Bank and Woori Bank are reviewing their plans.

As of Sept. 2, banks such as Standard Chartered Bank Korea, Citibank Korea, Daegu Bank and Jeju Bank had not capped household loans. Foreign banks don't have to follow government directives, and provincial banks are sometimes left out of the loop because they have small numbers of borrowers.

“Foreign banks charge higher interest rates because they can’t finance themselves as easily as the major local banks, but offer bigger loans,” said an official from a local bank. “People are now scrambling to foreign banks since local banks are tightening their lending.”

The amount of household loans lent by Kyongnam Bank during the first half of this year rose 11.8 percent compared to the second half of last year. That increase is second only to KakaoBank’s 13.8 percent rise. Busan Bank's household lending ranked third, rising 9.9 percent, and Daegu Bank’s rose 6.6 percent.

But many borrowers are paying for the privilege with higher interest rates.

“There are people who are going to have to max out their credit cards to get a hold of money if loans are tightened,” said Mr. Shin, a 30-year-old who recently opened an overdraft account at a provincial bank. “This is doing nothing but increasing the interest people have to pay.”

“It doesn’t make sense to rein in loans while not considering demand for loans or each individual's repayment abilities.”

Foreign and provincial banks are expected to tighten their lending too. Specific plans haven't been announced, but Citibank Korea and Standard Chartered Bank Korea are expected to cap loans later in September.

“The key function of banks is to evaluate the insolvency risk of individuals and set different levels of interest and maximum loan amounts,” said an official for a local bank.

“Placing restrictions on loan amounts for everyone is not only difficult for those who want loans, but also chips away at the competitiveness of the financial industry.”