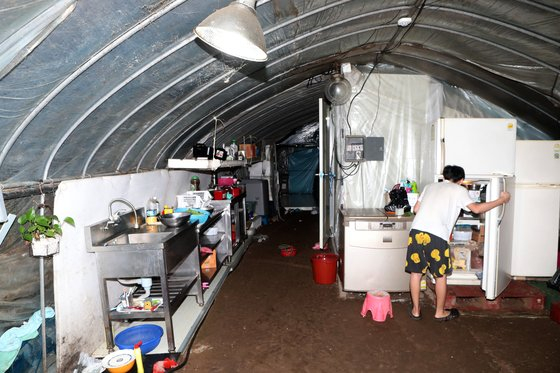 A family lives in a vinyl greenhouse in Pocheon, Gyeonggi. [CHOI JEONG-DONG]


For some low-income households, who are often completely priced out of the housing market, the only option is to find a cheaper alternative. With housing prices on the rise, the number of Koreans forced to live in temporary structures like vinyl greenhouses, construction huts and lean-tos is on the rise, up from 1.5 percent of low-income households in 2006 to 7.1 percent last year, according to an annual report conducted by the Ministry of Land, Infrastructure and Transport.

These households are classified as living in "alternative housing," which mainly covers temporary structures and gosiwon — very small rooms rented out cheaply, mainly to students preparing for exams.

Rising costs have increased the burden on low-income households. 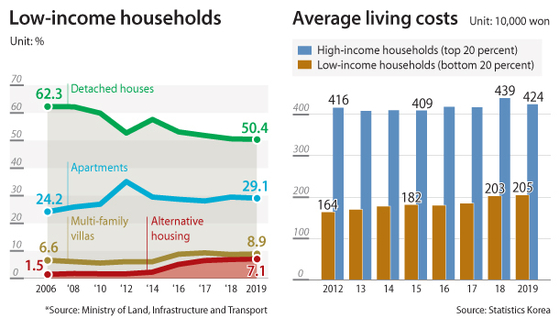 In 2006, about 62.3 percent of all low-income families lived in detached houses. Last year that number had fallen to 50.4 percent.

There has been a slight increase in the number of low-income families living in apartments compared to 2006, up from 24.2 percent to 29.1 percent, but the figure has actually been falling since it peaked at 35.1 percent in 2012.

High-income households, on the other hand, who used to live in houses, are moving to apartments.

According to the report released by the Ministry of Land, Infrastructure and Transport, about 76.6 percent of high-income households, or about eight out of 10 people, were living in apartments last year, up from 65.3 percent in 2006. During the same period, the number of high-income households living in houses decreased by 10 percentage points to 13.1 percent. This trend is more obvious in metropolitan areas, as apartment prices are rapidly skyrocketing.

While apartments in Korea are a desirable product, with demand increasing as income increases, villas, the Korean name for generally older buildings no higher than five stories containing a number of smaller housing units, are the opposite. Villas are inferior goods, and as income rises, demand declines. As wealth polarization intensifies, stigma attached to housing does too. In some elementary schools in Korea, "villa beggar" is used as an insult to children who live in cheaper housing.

“The government’s failure in real estate policies caused Korea's high demand for apartments,” said Yi Han-sang, a business professor at Korea University. “Raising the rates of taxes [at this point] is an act of shifting burdens to the tax payers. The government measures should aim more at improving people’s quality of life through resident-centered infrastructure expansion.”