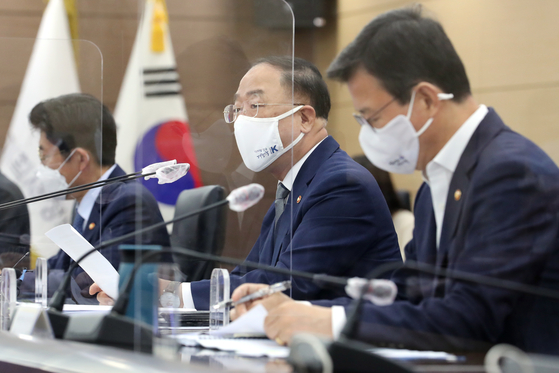 Finance Minister Hong Nam-ki, second from right, heading a meeting on global tax reform at the government complex in Sejong on Monday. [YONHAP]

Korea has signed on to the global tax plan designed to rein in the tech companies and get them to pay their fair share. It is also trying to make sure its major companies don’t get caught up in the rush to tax.

“We will respond thoroughly from the point of national interest,” said Finance Minister Hong Nam-ki on Monday.

Under its Pillar 1, the plan is also designed to allocate some income taxes to countries where goods and services are sold to make sure that more revenue is attributed to the places where the end user resides.

A 2023 deadline has been set for implementation.

Google, Facebook and Amazon were the original targets of the initiative, as they have been able to book profits in low tax countries by locating their servers and registering intellectual property in them. Many countries, Korea included, have been frustrated by the lack of tax revenue from companies with such significant sales within their borders.

But under the program, some Korean companies could be more heavily taxed, as they are large enough to trigger the implementation of the rules, which kick in for companies with global revenue above 20 billion euros ($23 billion) and profitability above 10 percent of revenue.

Samsung Electronics, with 236.8 trillion won ($209 billion) of revenue, and SK Hynix, with 31.9 trillion won of revenue, are both above the threshold and could find themselves having to pay higher taxes and pay more of their taxes to other countries.

The trigger level will be lowered to 10 billion euros after seven years, meaning that more Korea companies could be targeted.

The Korean government doesn’t believe the global tax reform will have a big impact on Korean companies.

In a statement released last week, the Korean Finance Ministry projected that as the Pillar 1 is expected to apply to the world’s top 100 companies by profit, only one or maximum two Korean companies will be affected.

It also said that as Korea’s corporate tax rate is 25 percent, most companies are already paying more than the minimum 15 percent being mandated by the global tax reform, and that double taxation treaties could help in cases where higher taxes are assessed overseas.

It added that the new regime could ultimately attract more companies from low-tax jurisdictions while increasing the amount of tax received from foreign tech companies selling in Korea.

“The new global corporate taxes will likely apply to Samsung Electronics and SK hynix, but the impact will be limited as they target multinational companies such as Google and Facebook that use jurisdictions with relatively low tax rates, such as Singapore and Hong Kong or tax havens like the Bermuda,” said DB Financial Investment analyst Kang Dae-seung, who added that any additional tax would be at a lower rate than for companies like Google.

The analyst said there is a need for discussion about how companies report revenue in different countries.

Google Korea for the first time disclosed its revenue in April due to a change in policy.

Google Korea’s revenue was mostly advertisement earnings and did not include revenue made via Google Play, which controls about 70 percent of Korea’s app market.

Google Play revenues are reported and taxed in Singapore.