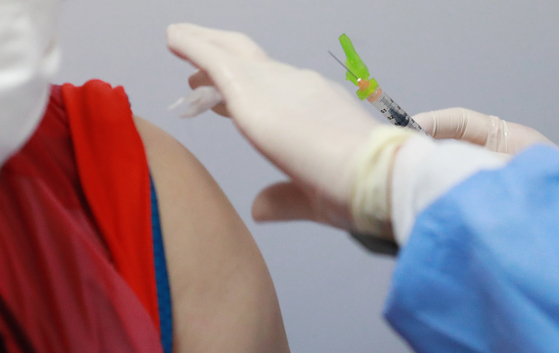 A medical staff injects a vaccine at a hospital in Gwanak District, southern Seoul, on Monday. [YONHAP]

Large Korean companies are getting a helping hand from the government in vaccinating some of their employees, with doses being carved out for them so they can keep their factories churning around the clock.

Display, semiconductor and automakers are on the list, with dozens of factories being targeted and the government asking for names so it can prepare the necessary inventory.

Smaller companies and people not associated with Korea’s industrial and technology leaders will not get this preferential treatment. They have to get in line.

For all other Koreans, especially the young, the wait could be long. Other than first responders and other essential workers and military personnel and reservists and their dependents, only those in their 50s and older are able to schedule vaccine appointments in July.

For people below 30, it could be the end of 2021 before they are eligible for a jab.

Under the special program, workers at large factories of major companies will start to get their shots in late July. The vaccines will not be purchased by the companies themselves but supplied from the government’s reserve to companies joining the program.

According to the Ministry of Employment and Labor, 44 factories have applied so far, requesting vaccines for around 390,000 people in total. Samsung Electronics and SK hynix have already sent lists of employees that want to be inoculation to the Korea Disease Control and Prevention Agency (KCDA).

“There was a request from the KCDA to estimate demand for Covid-19 vaccines—the list was recently finished and sent to the agency,” said an SK hynix spokesman. “We have no knowledge yet on when the vaccinations will actually take place. The plan is to follow the government’s schedule.”

The vaccine program will be limited to companies that have a hospital or clinic on site.

For Samsung Electronics, its Giheung, Hwaseong, Pyeongtae and Suwon factories, all in Gyeonggi, have hospitals inside their complexes. For these locations, even people working for suppliers to Samsung Electronics are eligible for vaccination if they work on site.

The Samsung Electronics communications team and other teams operating from offices in Seoul are not eligible.

Hyundai Motor’s Seoul headquarters in Yangaje District, southern Seoul, which does not have a medical center inside, is not covered by the program. Workers at Hyundai’s Ulsan, Gwangju and Namyang, Gyeonggi, plants will be able to receive vaccines.

Each facility will take responsibility for transporting and storing vaccines and syringes supplied by the government. That will require a cold-chain system of their own, as companies will have to vaccinate employees over the course of weeks. LG Display, for example, has around 25,000 employees working at its Paju, Gyeonggi, and Gumi, North Gyeongsang, factories.

Oil refiners are not part of the program. That’s because their facilities are already highly automated and employees rarely have to work in groups.

“We have medical staff at our operations, and people don’t really work face-to-face in groups, so we’re not really pushing for vaccines,” said a spokesman for SK Innovation, Korea’s largest oil refiner.

According to a spokesman for the Korea Federation of Small and Medium Business, the organization has not received any government request to assess vaccine demand among its members.

“We have quite a few offices nationwide, so we’re worried, but there’s not much we can do,” said an executive of a mid-sized company. “It’s not as if we can buy vaccines with our own money, so we’re waiting for the government’s decision.”

An executive from a small-sized firm says he feels “discriminated” against.

“The government could have considered giving priority for small businesses that depend on exports,” the source said.