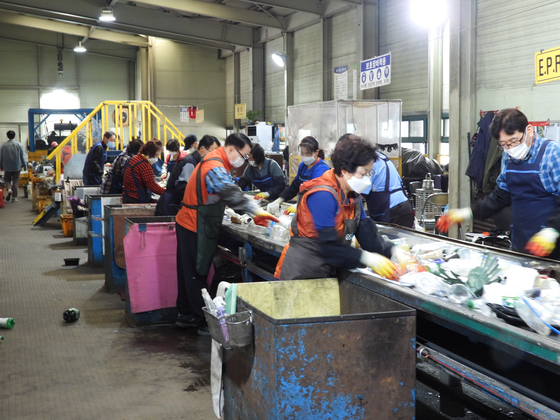 Recycling is a big part of living in Korea.

Yet only a third of the recyclable plastic waste from homes and offices in Korea is reborn as another plastic product.

The Ministry of Environment found that of 3.23 million tons of plastic disposed in 2018, around 1.45 million tons, or 44.9 percent, was recycled. The rest were incinerated or buried. Of the plastic waste recycled, only 466,000 tons were actually reborn as plastic goods. 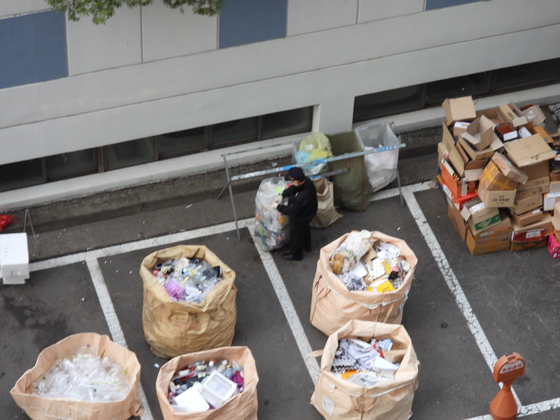 A security guard looks through the recyclable trash collected in an apartment complex in Yeongdeungpo District, western Seoul, on June 19. [KANG CHAN-SU]

To find out more about how plastic waste gets recycled in Korea, the JoongAng Ilbo spent time with some recycling companies for the past few weeks, following their collection, re-organization, disposal and recycling of plastic waste.

On the morning of June 19, a garbage truck stood parked by the waste piled up at an apartment complex in Yeongdeungpo District, western Seoul.

Over the duration of a few days, the residents had separated their recyclable waste by types – plastic bottles, used plastic bags and wrapping, paper waste, glass bottles and others.

But with only one truck to collect them all, the recycles got mixed up once dumped inside the truck.

“The amount of trash collected per apartment complexes can vary, and some of them have very little, so we cannot afford to send several trucks at once to these locations,” a worker for a recycling collection company told the JoongAng Ilbo. 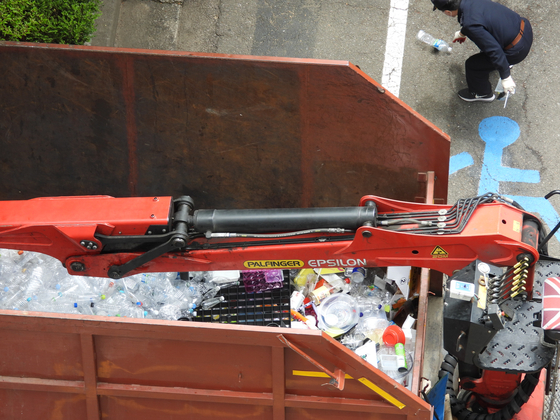 The trash is sorted once it arrives at a sorting center.


One such center in Gimpo, Gyeonggi, re-sorts some 32 tons of plastic waste every day, collected from houses and smaller residential buildings in its area.

When the JoongAng Ilbo visited the center on June 11, plastic waste of all types was piled up twice the size of an adult man. The pile moved slowly on a conveyer belt, and workers sorted plastic by type.

Each worker, standing on the either side of the conveyor belt, skillfully picked out PET bottles, yogurt containers and non-plastic waste mixed in, placing everything in an assortment of bins. 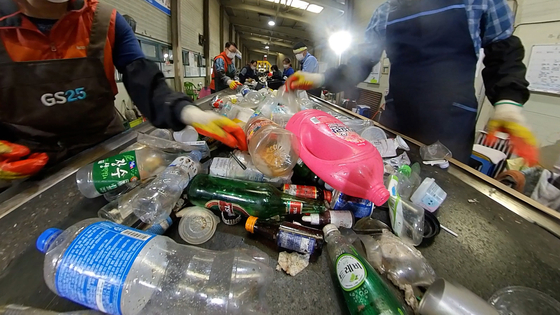 Recyclable waste being sorted out by workers at a center in Gimpo. [WANG JUN-YEOL]

“It seems many people don’t understand which trash is recyclable and which is not,” said Kim Hong-sub, manager of the center. “More than 30 percent of the trash that comes through here is not recyclable, so we send it off to be incinerated.”


According to the Ministry of Environment, around 46.4 percent of plastic waste collected at these recycling centers is not recyclable and ends up being incinerated or buried.

A big confusion exists around makgeolli (rice-based alcoholic drink) bottles. Many of them are colored plastic bottles, which are unrecyclable in Korea. According to Korea Zero Waste Movement Network, a civic group for waste management, as many as 60 companies are currently manufacturing makgeolli in colored bottles.

Two companies are trying something new. In April, Daehan Flour Mills and Hangang Brewery introduced makgeolli in clear plastic bottles, which can be recycled.

“We opted to use clear plastic bottles, and especially the ones where labels can come off cleanly,” said Koh Sung-yong, CEO of Hangang Brewery. “There is this general belief that environmentally-friendly plastic bottles can be more expensive – but we found that was not the case. The clear ones cost about the same as the colored ones.” 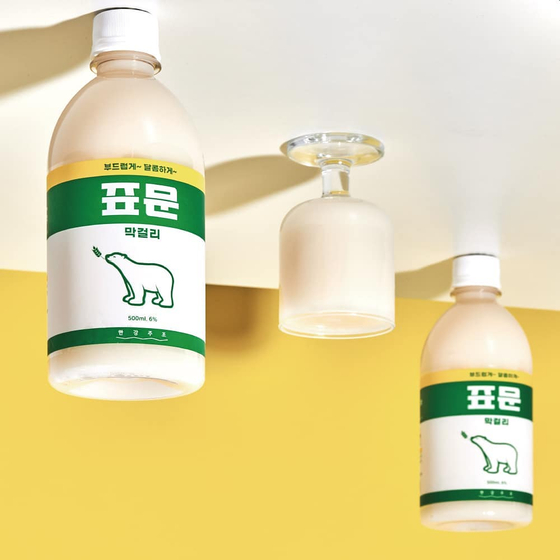 Only clear plastic bottles, rid of their labels, can be shredded into thin so-called plastic flakes. These can be used to create new plastic goods.


“The PET bottles have to be label-less to be completely recyclable,” said Kwon Doo-yeong, who heads a recycling center in Gimpo. “We have a designated area at the center where the workers work on detaching the labels.”

What makes their work particularly difficult, Kwon said, is the tendency of some people to throw away plastic waste with stuff still inside.

“If a plastic bottle filled with olive oil comes through, and a worker misses it, the bottle will burst in the process of shredding, ruining any chance for the plastic bottles around it to be reborn,” Kwon said. 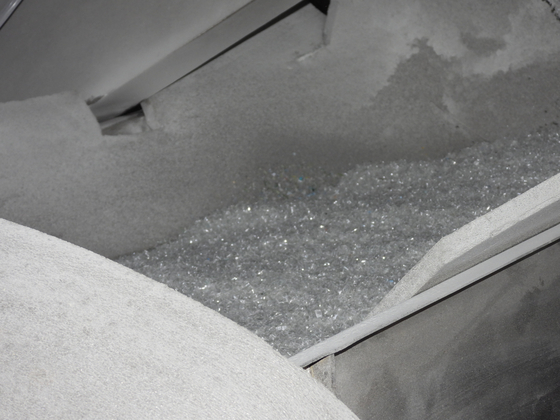 Plastic bags are another source for recycled goods.

One recycling center in Paju, Gyeonggi, takes the plastic bags thrown away by 600,000 households in Goyang, Gyeonggi, and turns them into plastic pellets. The pellets can be melted to create plastic goods.

“Sometimes the bags come with chicken bones or other perished food inside,” said Yoo Chang-bum, head of a recycling company that runs the center in Paju. “Plastic bags that have mayonnaise or gochujang [hot pepper paste] smeared on them are not recyclable.” 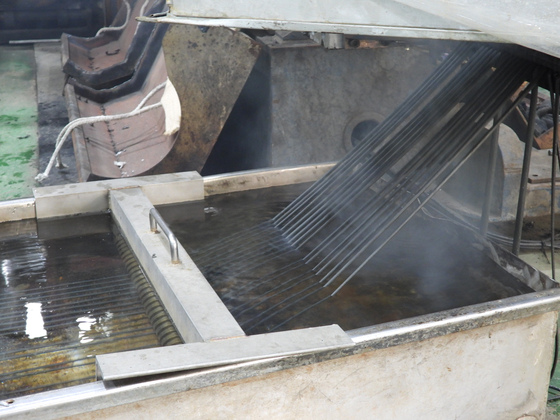 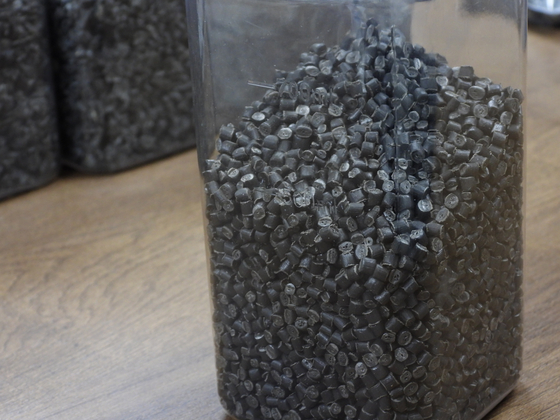 Kwon, Yoo, and the other heads of the recycling centers agreed that Korea needs a more systematic approach to recycling.

“For the cycle of recycling to work, we need the government to set the rules, for more companies to be licensed to manufacture products from plastic waste, and local governments should pitch in by buying these re-born plastic goods,” said Nam Soon-woo, head of a company that manufactures plastic gardening equipment and other goods from used plastic bags.

There is also ongoing research at institutes in Korea on producing fuel from used plastic waste. The Sudokwon Landfill Site Management announced in June that it started a study on the technology.

What individuals can do, in the meanwhile, is to think about emptying the contents of the plastic bags and bottles before throwing them into their bins. 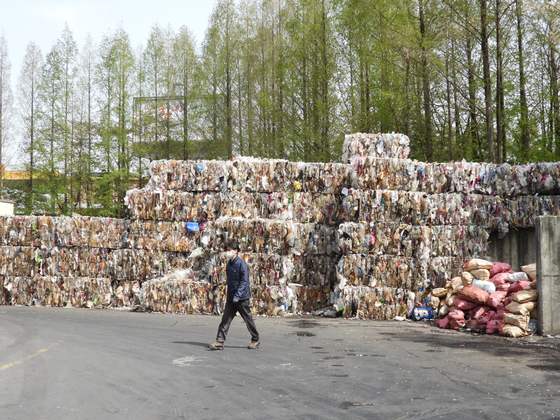 Plastic waste piled up in a recycling center in Gimpo. [KANG CHAN-SU] 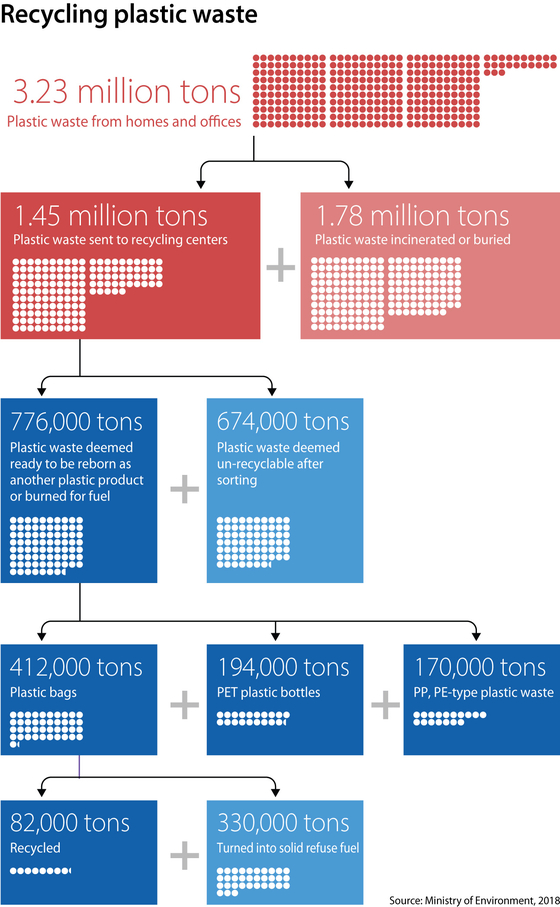 Korean elections are dirty, and it's not just from all the mudslinging