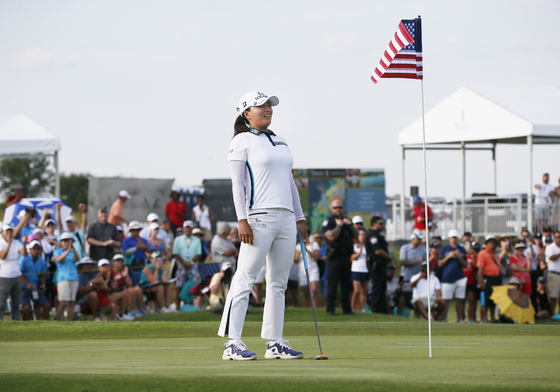 Ko Jin-young reacts on the 18th green after winning the LPGA Volunteers of America Classic at the Old American Golf Club in The Colony, Texas on Sunday. [AP/YONHAP]


Ko Jin-young picked up her eighth LPGA Tour victory at the Volunteers of America Classic held at Old American Golf Club in The Colony, Texas on Sunday, snapping a seven-month drought that saw her lose the world No. 1 spot last week.

Ko won with 16-under-par, 268, one stroke ahead of Finnish golfer Matilda Castren, who won the 2021 LPGA Mediheal Championship on June 13 to become the first Finnish competitor ever to win on the LPGA Tour.

Ko got off to a good start with an exceptional first round, topping the table with eight-under-par, 63. Lee Jeong-eun and Chun In-gee trailed behind by one stroke, tied at second with seven-under-par.

On the second day, rainy weather delayed the start of the second round, ultimately pushing things back so far that the golfers had to finish their second round before starting the third the next day.

Ko lost her top seat at the end of the second round as Castren made the most use of the softer ground to shoot five birdies, taking her score to 10-under-par. Ko shot four birdies and three bogies to record 9-under-par. 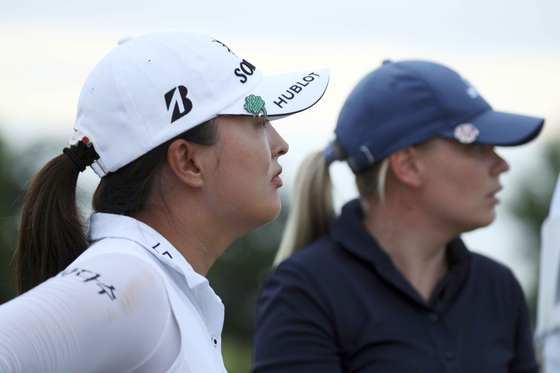 Ko Jin-young, left, and Matilda Castren of Finland wait to tee off on the 18th hole during the third round of the LPGA Volunteers of America Classic golf tournament in The Colony, Texas on Saturday. [AP/YONHAP]


But after playing the 31-hole marathon in the wind on Saturday, Ko signed for a bogey-free round and emerged on top once again at 14-under-par with three birdies and an eagle.

"In the last group, it's better to lead the group," Ko reflected on her position after the third round.

"It's better to play in a situation with even a little advantage. I will concentrate more, and I will try to make up for things that did not work out today."

Ko started out the final round steady, adding three birdies on the first four holes and a fourth on the par-4, 10th.

On the final par-4, 18th, Ko was seen on the teeing ground with a 3 wood, also called a fairway wood, while both players in her group pulled out their drivers for a longer shot. As Ko was leading the group by a shot, she was choosing accuracy and consistency over driving distance.

Though Ko's last three rounds were not as glamourous as her first, where she shot six birdies in the first nine holes and even an eagle, Ko did not lose her grip on the top spot, demonstrating the importance of consistency in golf.

Ko's first win this season comes after playing 10 events. Her last victory was at the 2020 CME Group Tour Championship at Tiburón Golf Club in Florida in November last year.

Her previous best result was tying for third alongside Hannah Green of Australia at the Hugel-Air Premia LA Open in Los Angeles, California this April.

Ko surrendered her world No. 1 spot in the Rolex rankings to Nelly Korda last week, after the American won her third LPGA tournament of the season. Ko is now at No. 2 after spending 100 weeks on top of the world ranking, from July 20, 2019 to July 27, 2021.

"When I was ranking No.1 I didn't [think about it], but after I moved to No. 2 I was thinking I got a lot of pressure when I was world ranking No. 1." Ko said in a post-tournament interview. 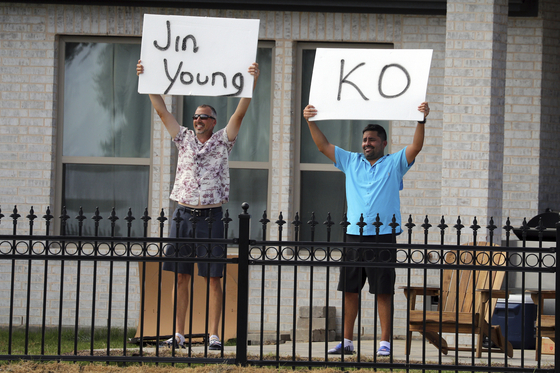 Spectators holds signs for Ko Jin-young as golfers play on the second green during the third round of the LPGA Volunteers of America Classic golf tournament in The Colony, Texas on Saturday. [AP/YONHAP]


Ko's Olympic qualification came in the same week that she lost the world No. 1 spot. Ko will compete alongside No. 3 Park In-bee, No. 4 Kim Sei-young and No. 6 Kim Hyo-joo at the 2020 Tokyo Olympics, representing Korea in the women's golf tournament.

Ko will first compete in one more LPGA tournament, The Amundi Evian Championship from July 22 to 25 at the Evian Resort Golf Club in France, before she flies off to Tokyo for the big stage.