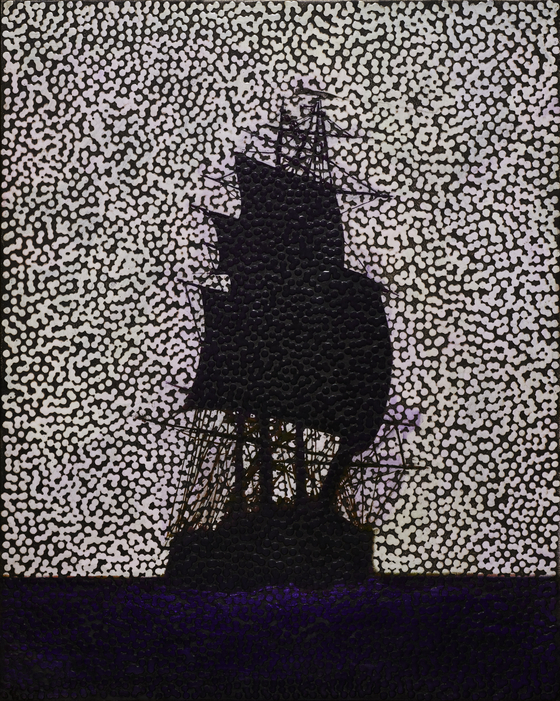 
The paintings by artist Daniel Boyd, now on view at Kukje Gallery in central Seoul, depict so many diverse images, including a round dinner plate with flower patterns, a photo of Aboriginal Australians and a poster of classic Hollywood movie “Mutiny on the Bounty” (1962).

Boyd depicts all these images because they are both closely and loosely related to the Australian identity of the artist who counts Aboriginals among his ancestors, according to the gallery. The artist was quoted by the gallery as saying, “All of my work is about, and starts with who I am, and they (my ancestors) are part of who I am.”

Even the dinner plate in his painting is not just a plate. It is among the personal objects once owned by Robert L. Stevenson (1850-1894), the Scottish author of the novel “Treasure Island,” now housed in the University of Sydney’s Chau Chak Wing Museum collection. The artist has been inspired by the adventure novel, which unconsciously reflects the history of explorations and colonization by the West. “Treasure Island” is also the title of the exhibition.


Boyd’s works on view lead the viewers to reflect on the images of the Caribbean and South Pacific regions, including those of his ancestors, in the history written by the Europeans that colonized the regions and the literature and cinema of the Eurocentric perspectives. His paintings of the images are covered with dots of transparent glue, which are metaphor of “lenses through which one views the world,” according to the gallery. Kukje quoted the artist as saying that the dots are “about perception and how we collectively understand something [...] about plurality or multiplicity.” 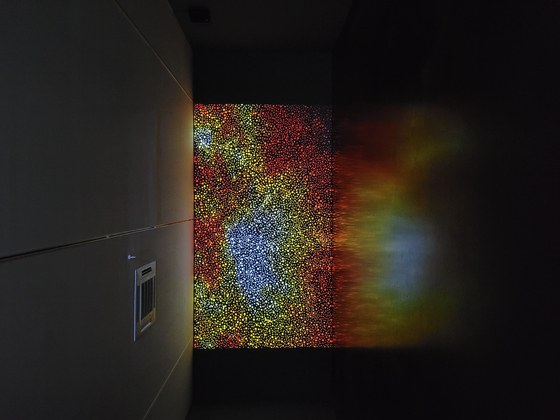 
As Boyd’s paintings are covered with glue dots, they appear clear when viewed from a distance, whereas the images become blurred when they are viewed up close. This might act as a metaphor of the reality that an issue can be easily defined and framed from a distance, while when the issue is looked at up close, its complexities make it difficult to be explained in short or it be clearly defined. This characteristic is more visible in Boyd’s new video work “Rivers,” which is accompanied by sounds developed in collaboration with Leo James, a producer and DJ based in Melbourne.


In addition, this exhibition might remind Korean viewers, who like to discuss the differences of “the East and West,” of how limited their interests are. There are so many worlds that do not belong to “the East and West.”