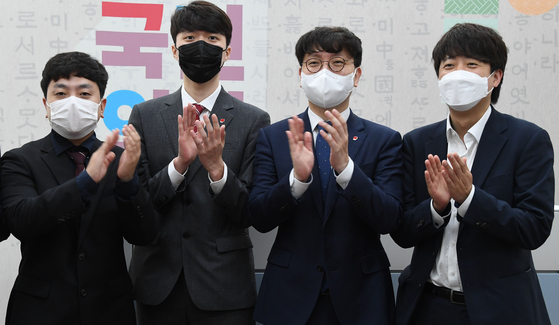 It is the first time that two people under the age of thirty will serve as chief spokesmen for the conservative PPP.

The pair finished first and second out of a pool of four finalists in the final round of a competition to select the party's new spokesmen. The contest was broadcast live on TV Chosun for two hours from 5 p.m. Monday

The other two finalists, 55-year-old Kim Yeon-joo and 35-year-old Shin In-gyu, who placed third and fourth in the vote, will serve as deputy spokespeople.

Lim is a student at Kyungpook National University's law school. He was previously deputy spokesman for youth affairs for the Liberty Korea Party – the predecessor of the current PPP – during the chairmanship of former Prime Minister Hwang Kyo-ahn from February 2019 to February 2020.

Yang is unemployed. He attracted attention by canvassing for Seoul Mayor Oh Se-hoon in an open-air campaign vehicle during Oh's mayoral campaign in April.

The televised debate was divided into three rounds. In the first round, the four candidates were divided into two teams and argued in favor of, or in opposition to, a particular policy or politician. In the second round, each candidate squared off with another, while in the third round the candidates were individually grilled by panelists.

Debate topics covered a wide range of political and social issues, including the controversy surrounding former Justice Minister Cho Kuk and his family and illegal demonstrations by the Korean Confederation of Trade Unions.

The debate was the latest among recent contests within the PPP that have resulted in the election of relatively young individuals for prominent party posts. Chairman Lee himself won his position in early June after beating out political heavyweights such as former lawmakers Na Kyung-won and Joo Ho-young.

Since his election, the party has been inundated with membership applications, with many new members in their 20s and 30s.

The main conservative opposition party said on June 16 that 23,000 new members joined since May 12, with 10,000 signing up through an online application system – about 10 times the number of new members in the same period last year.