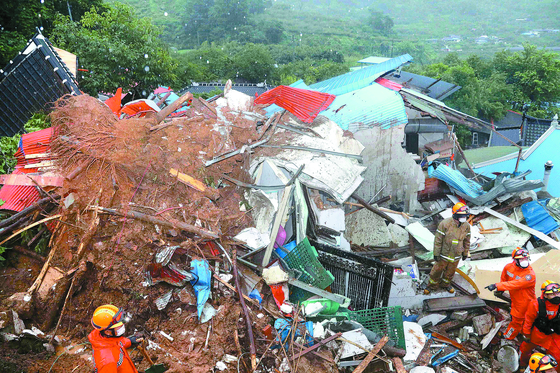 Two homes and one warehouse swept in a landslide in Gwangyang, South Jeolla, on Tuesday. Rescue workers found one resident of a home, a woman in her 80s, dead in eight hours following the landslide. [NEWS1]

Torrential rain in the southern regions led to floods and landslides that killed at least two people Tuesday.

Following some 201.5 millimeters (7.9 inches) of rainfall in Gwangyang, South Jeolla, from Monday to Tuesday morning, a landslide around 6:04 a.m. in a mountainous area of the city tore through two homes and a warehouse, killing an 82-year-old woman, police said.

There were reports earlier Tuesday that the woman was alive, because when the Fire Department called her cellphone, the line appeared to be busy.

“We called her several times,” said Choi Hyun-kyung, an officer of the Gwangyang Fire Department. “It looks like several people were calling her at the same time and that somehow led to the busy signal.”

Authorities found the 82-year-old woman’s body buried in the landslide, some 5 meters (16 feet) from her home on Tuesday afternoon. CCTV footage from the area from around 5:27 a.m. showed her leaving her house.

“You can see her leave the house then, but the footage cuts off in some 25 seconds,” said Choi. “We suspect that’s when the landslide swept down through the area.” 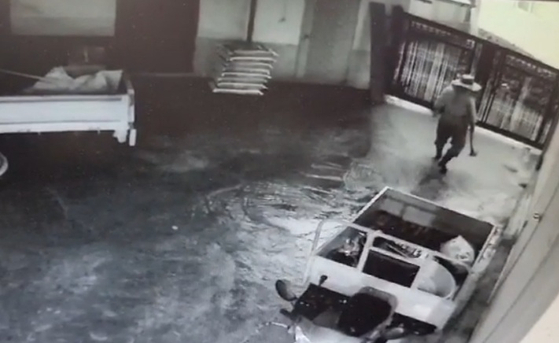 The CCTV footage shows the resident of a landslide-swept house in Gwangyang leaving her home on Tuesday morning. Authorities estimate she met a landslide soon after she left her home. The photo has been provided by a reader of the JoongAng Ilbo. [JOONGANG ILBO]

The resident of the other home swept away in the landslide was out of town for a hospital visit, according to police.

Torrential rain flooded many other homes in the province, including one in Haenam County, where a woman in her 60s was found dead. As of 10 a.m. Tuesday, Haenam County had received a total of 498 millimeters of rain, according to the national weather agency.

The South Jeolla authorities said at least 39 people fled their homes over the night in Gangjin, Haenam, and Jangheung counties.

In North Jeolla, authorities received at least 62 reports of flooded buildings and roads from Monday night to Tuesday morning, including several traditional markets in Iksan.

All hiking trails in North Jeolla have been off limits since Monday.

“We expect the rainfall to continue through the day after tomorrow [Thursday] in Gwangju,” the Korea Meteorological Administration’s Gwangju office said in its statement. “There may be short moments of clear weather, but we are seeing yet another group of rainclouds headed this way.”