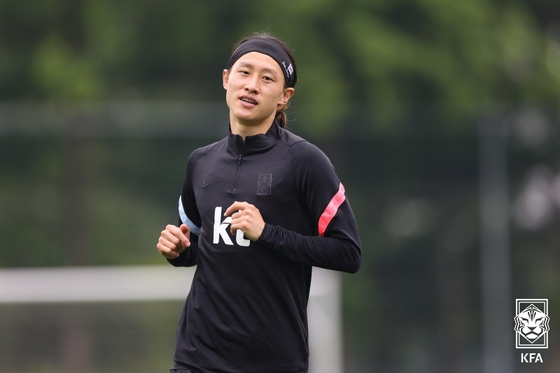 Lee Jae-sung trains at the National Football Center in Paju, Gyeonggi on June 1, in preparation for the 2022 World Cup Asian Qualifiers. [KFA/ YONHAP]

Lee has already been in Germany for a few years. The national team regular moved from K league 1 club Jeonbuk Hyundai Motors to Holstein Kiel in the second-tier Bundesliga league in 2018.

Lee played 104 matches during three seasons with Kiel, scoring 23 goals and picking up 25 assists for the club. On June 30, his three-year deal with Holstein Kiel ended.

Goal.com reported that Lee's new three-year deal with Mainz was signed on Thursday. The size of the contract has not been revealed.


In June, Lee was in Korea training with the Taeguk Warriors. He appeared in two Asian qualifiers for the 2022 Qatar World Cup against Turkmenistan and Lebanon.

Lee injured his ankle during the match against Lebanon on June 13 in Goyang, Gyeonggi, but appears to have bounced back, with his medical test results approved by the new club.


Mainz has been home to many great Korean footballers in the past, with Cha Du-ri playing for the club during the 2006-07 season, Koo Ja-chul during the 2014-15 season and Park Joo-ho during the 2013-2015 season. Ji Dong-won joined the club in 2019 and is currently on loan to Eintracht Braunschweig.


Koreans have a long history in the Bundesliga. Footballing legend Cha Bum-keun, known as Tscha Bum in Germany, played in the German league from 1978 to 1989, scoring 98 goals in 308 matches. Tscha Bum is still held up as football royalty today, sitting at the very top of the Korean game alongside other European stars Park Ji-sung and Son Heung-min.


Mainz is yet to officially announce the new signing.