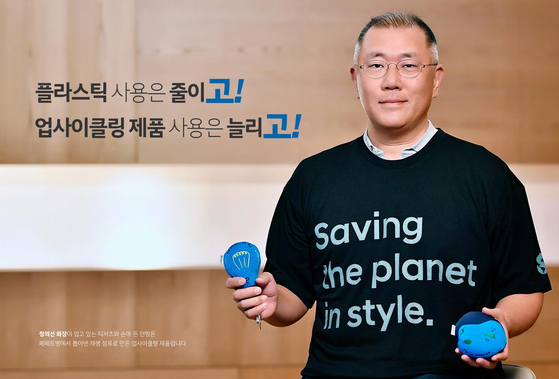 Hyundai Motor Group Chairman Euisun Chung participates in a plastic-free campaign led by Korea's Ministry of Environment in May. [YONHAP]


Hyundai Motor, Kia and three related companies said Wednesday they are joining the RE100 campaign, a global campaign encouraging businesses to use only renewable electricity by 2050.

RE100, short for Renewable Energy 100 percent, was begun in 2014 by The Climate Group in partnership with the Carbon Disclosure Project.


Companies that consume more than 100 gigawatt-hours (GWh) of electricity per year can voluntarily join the campaign. Then every year they are evaluated on their energy usage.

Some 310 companies around the world have joined as of June including Apple, General Motors and Microsoft.


“Five companies aim to achieve RE100 goals by 2050 and, depending on the company and its business environment, some aim to reach 100 percent renewable energy usage by 2040,” Hyundai Motor said in a release Wednesday.

The companies’ strategies include directly generating electricity by installing solar panels in major facilities and purchasing renewable energy through agreements with electricity producers.

Hyundai Motor’s efforts to fight climate change started in 2013 when the automaker installed solar panel on the roof of its Asan factory. They generate some 13,000 megawatt-hours (MWh) of electricity per year.

In partnership with Korea Hydro & Nuclear Power, the automaker also installed solar panels at its Ulsan factory, which generate 25,000 MWh of electricity per year.

Kia’s Slovakia factory has been running entirely on renewable energy-generated electricity since 2019.


“The most important thing in countering climate change is putting thoughts into action,” said Euisun Chung, chairman of Hyundai Motor Group in a speech at the Partnering for Green Growth and the Global Goals 2030 summit held in Seoul in May.

“Hyundai Motor Group will contribute to achieving carbon neutrality for the entire lifecycle of a car from manufacturing and driving to discarding [of the vehicle].”