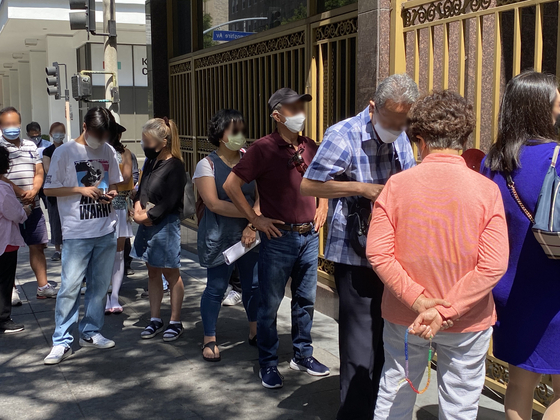 People queue outside the Consulate General of Korea in Los Angeles on July 1 to apply for waivers of quarantines after entering Korea. [YONHAP]

The ministry has confirmed that the diplomats hadn’t complained of work-related issues, and is looking into whether they suffered from depression over extended postings due to the pandemic.

The two diplomats’ locations were withheld from the press on the request of their relatives.

“It’s been impossible to go home, because we have to quarantine for two weeks in Korea and then quarantine for another two when we return to the host nation,” a diplomat told the JoongAng Ilbo on the condition of anonymity.

The pandemic in general has made duties more stressful for diplomats.


“As a diplomat, you cannot help but be extra-careful in your meetings with other people in the host nation, because you don’t want to be that Korean diplomat who gets infected and then impacts negatively all the work that has to be done at the embassy,” the diplomat said. “So, diplomats end up shuttling between home and embassy, and not going anywhere else.”

Some diplomats whose families remained behind in Korea haven’t seen their children in over a year.

The workload, especially for consular sections, has been some of the highest in years.

The number of calls that consular sections of Korean embassies received jumped from 240,019 cases in 2019 to 315,679 in 2020, according to the Foreign Ministry. Of the calls in 2020, 116,376 or about 36 percent, were those concerning accidents and emergency situations involving Korean citizens.

“There have reportedly been cases when some Korean residents came into embassies to demand masks, and some have even asked the embassy if it can provide daily updates on local breakouts of Covid-19 cases,” an official of the ministry told the JoongAng Ilbo.

“We even heard there was one Korean who complained at an embassy, hurling expletives at the staff members, demanding they do something to speed up the process of vaccination for Koreans, or provide residents with flights back to Korea.”

New measure allowing people vaccinated abroad to enter Korea without a two-week quarantine period if they are visiting relatives started July 1. As a result, long queues have become a norm outside some Korean embassies.

The Foreign Ministry said it will be flying in Korean diplomats from overseas in small groups so they can be vaccinated in Korea. The ministry had looked into the option of shipping vaccines to the overseas postings, but the logistics were too complicated.

“Some diplomats haven't been able to come home for nearly two years,” said a ministry official. “They were thrilled to hear they can come home for vaccinations. We hope the respite, though it may be brief, gives them some time to relax and spend time with their family and friends.”

The ministry added that it will be offering PTSD treatment programs for consular officers in charge of handling the accidents and emergencies involving Korean citizens.

If you or someone you know is feeling emotionally distressed or struggling with thoughts of suicide, LifeLine Korea can be contacted at 1588-9191. The Seoul Global Center offers English-language counseling. Contact 02-2075-4180 to arrange a session. Other international helplines can be found at www.befrienders.org.

June is a turning point (KOR)

June is a turning point