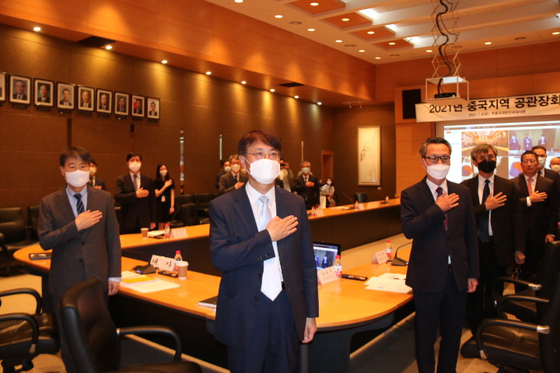 Korean diplomats from the embassy and consulates in China, including Korean Ambassador to China Jang Ha-sung, center front, salute the Korean flag at the beginning of a meeting in Beijing on July 9. [YONHAP]

The Korean Embassy in China was found to have used over 80 percent of its budget for networking on buying drinks and gifts in recent years, which may violate a regulation of the Foreign Ministry, the JoongAng Ilbo reported exclusively on Wednesday.

According to Foreign Ministry records obtained by the opposition People Power Party lawmaker Lee Tae-kyu, the Korean Embassy in China used 84.8 percent of 241.8 million won ($202,995) allotted for networking with policymakers and businesspeople from January 2020 to last July on buying drinks and gifts.

It was the highest percentage among 39 Korean embassies and consulates that Rep. Lee's office looked into. Coming in second was the Korean Embassy in the Dominican Republic, which used 77 percent of its networking budget on drinks and gifts in the same time period. The consulate in Shanghai, China, the consulate in Guangzhou, China, and the embassy in India all used at least 65 percent of the money on drinks and gifts.

“We compared 39 embassies and consulates, and found that at least one out of three were spending over 50 percent of the budget on drinks and gifts,” said the office.

Funds earmarked for networking are usually for diplomats to use in in-person meetings. The Foreign Ministry does allow the use of the networking budget for buying drinks and gifts, but in an internal guide, makes clear missions shouldn't go overboard.

The Covid-19 pandemic and social distancing requirements may have left diplomats without any alternatives, according to one former ministry official.

“Before the pandemic, the networking meetings would happen 200 to 300 times a year, and the funds allotted for networking often could not cover all these meetings’ expenses,” said a former high-ranking official of the ministry speaking on the condition of anonymity.

“Since in-person meetings have been drastically reduced with the onset of the pandemic, diplomats were probably left without much option other than to spend the money on gifts.”

But not all missions did so.

“It’s quite customary in China to give alcoholic drinks as gifts,” said another former high-ranking official of the ministry, though he admitted that the amount spent by the Korean Embassy in China on drinks and gifts last year "does appear excessive.”

This was not the first time the Foreign Ministry’s budget for networking came under the legislature’s scrutiny. The ministry was questioned by the Assembly last month on allegations that part of the networking funds was used for personal gatherings hosted by ambassadors’ spouses in some countries.