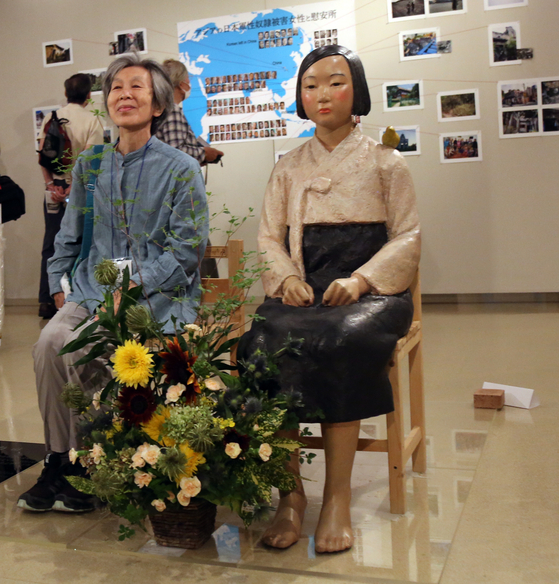 A visitor to an exhibition featuring a statue symbolizing "comfort women" at Citizen's Gallery Sakae in Nagoya’s Aichi Prefecture in Japan poses with the statue on Tuesday, when the exhibition opened. Once scheduled to run through Sunday, the exhibition has been suspended over a delivery of an unidentified explosive on Thursday. [YONHAP]

An exhibition in Japan featuring a statue symbolizing victims of the Japanese military’s wartime sexual slavery was suspended on Thursday after a small explosion at the gallery.

A package was delivered to the gallery in Nagoya, central Japan, on Thursday, reported Kyodo News, a Japanese media outlet. When a staff member of the exhibit tried to open it, "something like a firecracker inside burst," Kyodo said.

No one was injured, but the organizer of the exhibition decided to shut it down for safety's sake.

Authorities in Japan are investigating the package.

The exhibition that opened Tuesday at the Citizen's Gallery Sakae in Nagoya’s Aichi Prefecture was running through Sunday. It was supposed to run in two bigger Japanese cities, Tokyo and Osaka, but whether those exhibitions can be held became unclear after protests.

The exhibition features the so-called “Statue of Peace,” which represents Korean women forced into sexual slavery by the Imperial Japanese Army before and during World War II.

The statue was made by Korean sculptors Kim Seo-kyung and Kim Eun-sung and shows a seated, short-haired girl in a white-and-black hanbok (traditional Korean attire), with a bird on her left shoulder and an empty chair next to her. The sculptors designed the iconic original statue near the Japanese Embassy in central Seoul, installed in 2011, and other versions around the world.

A similar exhibition was held in Japan in August 2019, but was suspended after three days because of protests.

In addition to the statue, the exhibition also displays “Holding Perspective Part 2,” which shows an image of Japanese Emperor Hirohito, who held the throne during World War II, set on fire. The work provoked a strong backlash from right-wing activists.

The exhibition in 2019 was forced to close following a series of threats and complaints. It reopened for a week in October 2019, with heightened security.