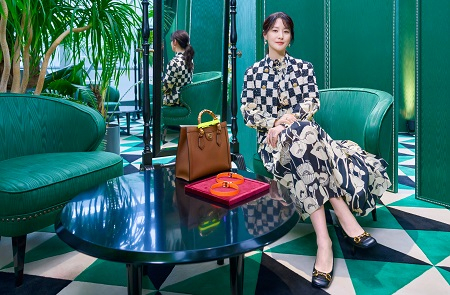 Lee attended the event dressed in a tweed short-sleeved jacket in ivory and black paired with a jersey dress with a poppy flower print from the Gucci Ouverture collection. She personalized her brown Gucci "Diana" small tote bag by having her initials monogrammed on it.

Gucci’s creative director Alessandro Michele reinvented the Gucci "Diana” bag in a contemporary style, as a tribute to Princess Diana’s 60th birthday. The functional, detachable leather straps that maintain the shape of the handles have been redesigned in new fluorescent colors like yellow, pink and orange. The bag now comes in three sizes: medium, small and mini, which are available both online and offline.

Actor Lee, who shares a long history with the designer brand, became the first Asian celebrity to be appointed ambassador for Gucci’s “Chime For Change” campaign back in 2013.

The global campaign was a movement dedicated to promoting women’s rights and other gender issues. She also took part in another cultural awareness campaign, sponsored by Gucci and the city of Seoul the same year. Since then, Gucci has continued to host events on Korean heritage and other social contribution activities in Korea.