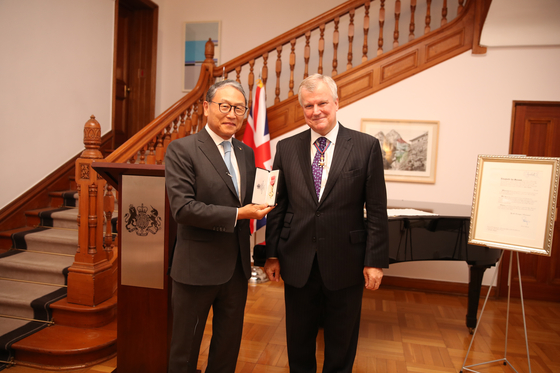 Yun Sang-koo, director of the Rotary Foundation and son of former President Yun Po-sun, left, receives the Order of the British Empire in recognition of services to cultural and educational relations between Britain and Korea at the British Embassy in Seoul on Thursday. Simon Smith, British ambassador to Korea, right, presented the honor. Yun is the eldest son of former President Yun, in whose name an annual conference has been held at the University of Edinburgh on topics pertinent to both Korea and Britain since 2013. The next symposium will be held in Edinburgh in late October 2021, examining the effects of Covid-19 on British and Korean societies. [BRITISH EMBASSY IN SEOUL]