[TEST DRIVE] Electrified G80 is luxe but not an EV breakthrough

[TEST DRIVE] Electrified G80 is luxe but not an EV breakthrough 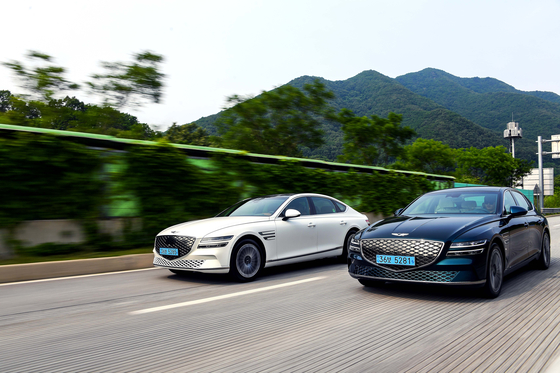 The Electrified G80s on the road. [HYUNDAI MOTOR]

The Genesis G80 is a dominant force in Korea's luxury sedan market. Whether its electric version will assume the same crown in the burgeoning electric vehicle (EV) market remains to be seen.

The Korea JoongAng Daily recently test drove the electric version on a 90-kilometer course around the outskirts of Seoul. It was a very nice luxury sedan, for sure, but with no breakthrough charm as an EV.

The Electrified G80, contrary to what the name suggests, is not made on Hyundai Motor's E-GMP modular platform, which is being used for the group's other EVs. In other words, the electric G80 has been made on an existing platform designed for internal combustion engines.

Genesis' GV60, expected to launch later in the year will be the first Genesis to be built on the E-GMP platform.

The first impression behind the wheel of the Electrified G80 was that its acceleration and braking were strong and responsive enough, which are salient issues considering its weight.

Due to its battery, the electric G80 weighs 2,265 kilograms, which is 300 kilograms heavier than its petrol-engine predecessor.

In Sport driving mode, the car can reach 100 kilometers per hour within 4.9 seconds.

Perhaps due to its weight, the electric G80 has deployed a pretty strong regenerative braking function to use electricity more efficiently.

Regenerative braking allows the vehicle to charge itself from the car's kinetic energy as it slows down. In practice, this means the car slows down when you lift your foot from the accelerator and before you step on the brake. This takes some time getting used to. 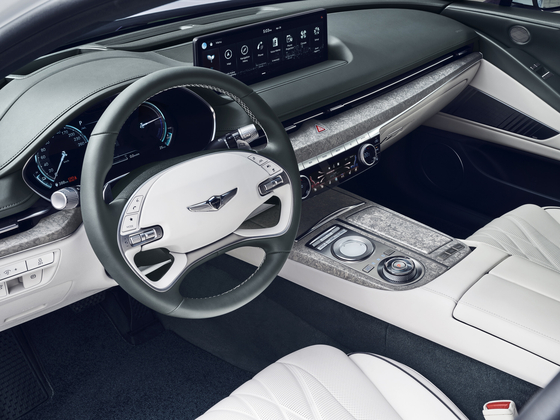 The first part of the test drive was done with that function on medium level -- five levels are possible, including shutting it off -- and it still felt pretty strong.

As soon as I took my foot off the gas, the vehicle decelerated dramatically.

This could be a plus when driving on a congested road and the driver has to do lots of accelerating and braking.

But on a highway, it merely made for jerky driving and I turned off the function on the return trip.

After finishing the 90-kilometer trip, the car had used up 65 kilometers from the 340 kilometer range on the battery at the starting point. This meant that at least 25 kilometers were saved by using the regenerative function and from power from the solar panel on the car's roof.

When driving over bumps, the car's suspension felt too stiff.

EVs often have stiffer suspensions because of their heavier weight.

But EVs are trying to offer driving experiences as smooth as an internal combustion engine, so the hint of a rumble seat was a bit disappointing.

The car's floor was higher than in other EVs and internal combustion engine cars, probably because of the battery underneath. That took some adjusting of the driver's seat.

Design-wise, the exterior showed most of the signature design features from the original version, including a large pentagonal grille and two horizontal lines in the headlights and taillights.

Although it is not made on the E-GMP platform, the electric sedan offers some features that only E-GMP-made EVs were capable of in the past. It has a vehicle-to-load (V2L) function that enables the electricity remaining in the car's battery to be used to charge other electronic devices. The V2L function, however, is only possible from the exterior as there are no sockets inside.

So charging a laptop inside the car isn't possible, as it is in Hyundai's Ioniq 5 or Kia's EV6.

It is located on the grille, making it possibly handy for camping.

The Electrified G80 comes with a multi-charging system that can accommodate both 400-volt and 800-volt charging.

The sedan has a 82.7 kilowatt-hour battery able to drive 427 kilometers on a single charge and is offered in standard four-wheel drive.

Its price starts from 82.8 million won, just under the 90-million-won eligibility ceiling for the government's EV purchase subsidy. 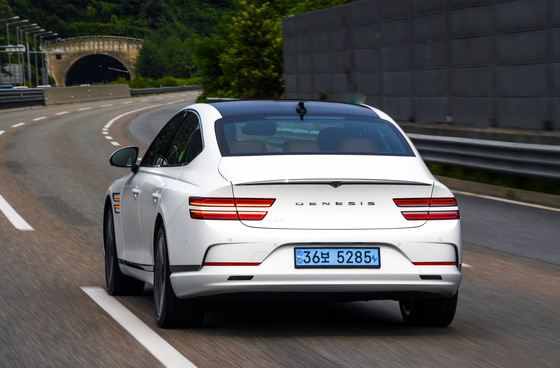