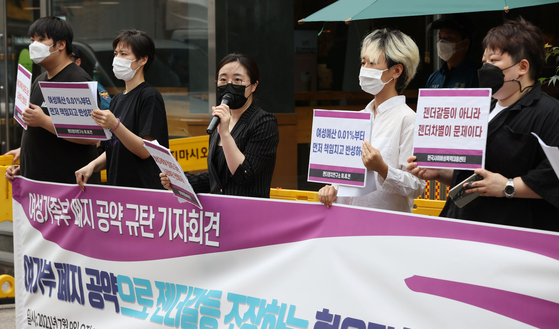 Conservative politicians Yoo Seong-min and Ha Tae-keung, both vying for the PPP ticket to run for next year's presidential election, made campaign pledges last week to abolish the Gender Equality and Family Ministry.

Yoo, a former four-term lawmaker who also ran in the 2017 presidential elections, claimed that the ministry's tasks overlap with other government agencies and said the leftover budget from abolishing it can be used to fund a so-called G.I. bill to support men who have completed their mandatory military service.

He was also critical of the ministry's passive handling of high-profile sexual assault cases such as late Mayor Park Won-soon and former Busan Mayor Oh Keo-don. Oh was sentenced to three years in jail last month for sexually harassing his employees, while Park committed suicide in July 2020 after a secretary accused him of sexual harassment.

In a Facebook post last Tuesday, Yoo wrote, "There's no reason to maintain a separate Gender Equality and Family Ministry when half of the population is female and all the other government ministries are related to women's issues."

Yoo argued that the gender ministry is failing to deliver on its duty of protecting women's rights and promised to install a presidential committee on gender equality to replace the ministry if he is elected president.

Ha, a three-term lawmaker, also made a similar argument and wrote on his Facebook account Saturday: "There will be no resolution to gender conflict without the abolition of the Gender Equality Ministry, which has divided men and women."

Lee Jun-seok, the young head of the PPP, has also publicly supported dissolving the ministry, calling it "incapable," and said Tuesday that he hoped presidential candidates will make a promise to dissolve it.

Lee in a radio interview Friday discussed abolishing the ministry, saying that some things are meant to be "boldly thrown away when cleaning the house."

The ministry dates back to the Presidential Commission on Women's Affairs founded in 1998 under the Kim Dae-jung administration. The Ministry of Gender Equality was launched in January 2001, separating from the Ministry of Health and Welfare tasks aimed at advancing women's rights and status through policy against gender discrimination.

It oversees responsibilities such as the protection of the victims of domestic violence and sexual violence, prevention of sex trade, expansion of women's participation in society and coordination of gender-related policies. It expanded its duties in 2010 to cover policies for youth and families, including multicultural households, and has been responsible for sometimes unpopular policies such as the controversial "shutdown law" that bans minors from playing PC games after 12 a.m.

The issue of dissolving the ministry has been divisive among opposition politicians, however, and Jeju Gov. Won Hee-ryong pointed out that making an issue over the abolition of the ministry is not "wise."

Won, another PPP contender for the March 9 presidential elections, while saying the Gender Ministry is in need of reform, questioned last week whether getting rid of it would be the "solution to bringing unity in gender conflicts."

Lawmakers of the ruling Democratic Party (DP) in turn accused the PPP of losing awareness of the crux of the gender equality by merely focusing on securing the votes of young male voters in their 20s and 30s, perhaps appealing to a demographic who claim to feel alienated because of feminism.

Former Prime Minister Lee Nak-yon, a DP presidential hopeful, on Sunday said that he is opposed to abolishing the Gender Equality Ministry and said it is time to "further expand its role, function and responsibility," as he announced a set of campaign pledges to improve women's daily lives.

The Gender Equality Ministry also responded to the calls for its abolishment.

Vice Minister of Gender Equality and Family Kim Kyong-seon said in a briefing Wednesday, "A lack in effective policies is a whole different matter from eliminating the institution or organization in charge of the policy."

Referring to the support system for victims of sexual and domestic violence in the ministry, she said, "For the past 20 years, the Gender Equality Ministry has been operating various programs to spread the value of gender equality and protect the vulnerable in blind spots [of society]."

She continued, "Where can these people get this kind of help without the Ministry of Gender Equality and Family? We are always doing our best for those who are in need of our help."

Women's rights groups including the Korean Women Lawyer Association have protested the PPP presidential contenders' move to abolish the ministry.

Activists from the Korea Women's Political Solidarity, Korea Cyber Sexual Violence Response Center and Network of Women Politics also held a rally in front of the headquarters of the PPP headquarters in western Seoul, stressing the need for the ministry to oversee the protection of women against sexual violence and to educate the public on gender equality.