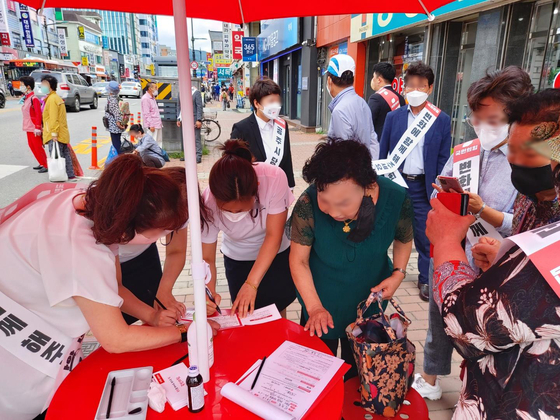 In this photo provided by Rep. Chung JIn-suk of the People Power Party on Wednesday, residents of Gongju, South Chungcheong, sign up for membership in the conservative party at a street booth. [YONHAP]


The People Power Party (PPP), considered not long ago as a cemetery for political dinosaurs, is being inundated with membership applications after it elected 36-year-old Lee Jun-seok as its new chairman.

“Because there are so many applicants, the online server crashed twice,” a PPP worker told JTBC.

The main conservative opposition party said Wednesday that 23,000 new members joined since May 12, with 10,000 signing up through an online application system. That number is about 10 times the number of new members in the same period last year.

“This is an unprecedented rise,” PPP Chairman Lee said Wednesday. “For a political party, an increase in party members is a more concrete sign of its growing power than a frequently changing approval rating from a poll.”

After he won the chairmanship last Friday, Lee said it was his goal to recruit 30,000 new online members.

Lee, who has no experience of winning a legislative election during his 10-year political career, is the youngest leader of a major political party in Korea’s history. The party has 102 lawmakers in the 300-seat National Assembly. 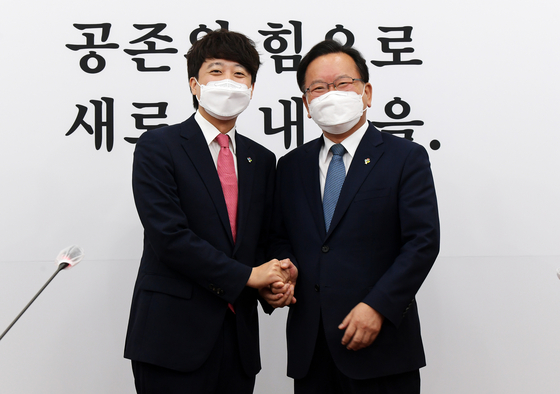 People Power Party Chairman Lee Jun-seok, left, takes a photo with Prime Minister Kim Boo-kyum, who pays a visit to the National Assembly to congratulate him for winning the leadership race. [NEWS1]

According to the Seoul Metropolitan City chapter of the party, 800 new members signed up last Saturday and Sunday, immediately after the PPP National Convention. “We used to receive a daily average of 100 new applications in the past, but the number skyrocketed,” said Park Seong-jung, head of the PPP’s Seoul chapter.

The PPP is even attracting members from the Honam region, comprised of Gwangju and South and North Jeolla provinces, which is the stronghold of the ruling Democratic Party (DP).

According to a National Election Commission report published in November 2020, the Liberty Korea Party (LKP), the predecessor of the PPP, had 3.475 million members in 2019, comprising 40.1 percent of the nation’s populace claiming party memberships. The ruling DP had 4.065 million, or 47 percent.

“Since April, we've seen the number of new members grow about 10 times,” said a PPP Gwangju chapter worker. “The number of online applicants in particular went up by 200 percent. Since the National Convention, people in their 20s and 30s increasingly signed up online as members.”

The similar trend was seen in North and South Jeolla provinces.

“We are seeing a rush of new members,” Rep. Han Ki-ho, head of the Gangwon chapter said in a Facebook posting. “Ever since Lee declared his bid to run in the chairmanship election, the chapter’s online members grew by 14 times.”

In a recent poll announced by the Realmeter on Monday, the PPP’s support rate was 39.1 percent, while the ruling DP scored 29.2 percent.

As the PPP expands its support among younger voters in the months leading up to the March 2022 presidential election, DP Chairman Song Young-gil on Wednesday urged President Moon Jae-in to pay more attentions to issues that concerns the young.

In a speech before the National Assembly, Song said Moon should appoint a new special minister in charge of youth affairs.

“Now is a disastrous time for the youngsters,” Song said. “I propose to the president to create a new special minister post in charge of youth issues because we need a long-term, comprehensive measure, not a short-term one. The minister should be in charge of offering housing, job and education support to the young and serve as a channel for the young to communicate with the government.”