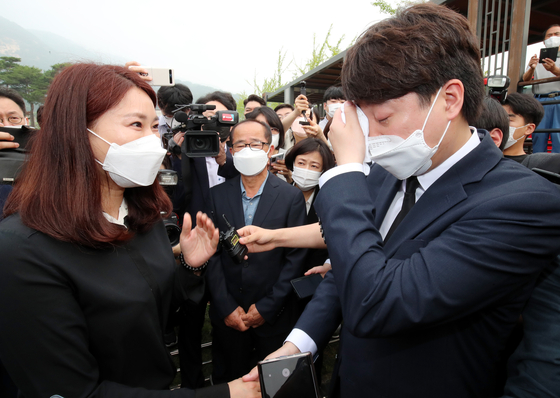 People Power Party Chairman Lee Jun-seok, right, sheds tears at the National Cemetery in Daejeon on Monday while talking with a surviving family member of a sailor killed during the North's sinking of the Cheonan warship in 2010. [YONHAP]


Chairman Lee Jun-seok of the main opposition People Power Party (PPP) started his first public activity Monday by paying his respects before the graves of the sailors killed by North Korea’s torpedoing of the Cheonan warship.

Lee, 36, elected the new leader of the second-largest party with 102 lawmakers, visited the National Cemetery in Daejeon early in the morning. He said he chose the destination to publicly promise stronger efforts from the conservative party to improve the country’s treatment of veterans and patriots.

During the visit, Lee met with surviving family members of two fallen sailors of the Cheonan. The ship sank on March 26, 2010, in the Yellow Sea, killing 46 crew members. An international investigation later concluded that the ship was sunk by a North Korean torpedo. The North has denied that it was responsible for the sinking.

Lee offered an apology to the families that the government, including the conservative administrations of Lee Myung-bak and Park Geun-hye, failed to honor them properly. “I promise to do my best,” he said.

Later in the day, Lee also visited Gwangju and offered condolences to the families of the victims killed by a building that collapsed last Wednesday. Nine people in a city bus were killed when the building collapsed on it.

As the PPP's new chairman, Lee also hosted his first Supreme Council meeting at the National Assembly in the afternoon. “Our attempt to go against the norm starting today must become a new standard for politics,” Lee said, promising that he will completely reinvent the party by introducing many changes.

Lee also attended the general assembly of the PPP lawmakers later in the day. 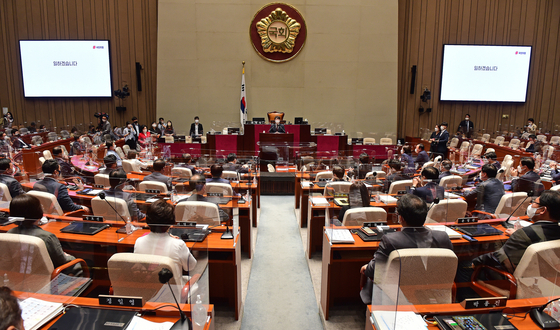 Lee also did not hesitate to contact top politicians outside the PPP, largely to invite them to join the presidential primary of the conservative party. Lee met with Ahn Cheol-soo, head of the People’s Party who was defeated by President Moon Jae-in in the 2017 presidential race, on Saturday for about 40 minutes.

Lee said Sunday that he had received a congratulatory message from former Prosecutor General Yoon Seok-youl. “We need to start the presidential primary as late as mid-August,” Lee said. “I hope Yoon joins our party as soon as possible.”

Lee said Monday that he is also open to the idea of restoring the PPP membership for Rep. Hong Joon-pyo. Hong, the PPP's former presidential candidate for the 2017 race, left the party last year after he was denied a general election nomination, then ran independently and won to become a sixth-term lawmaker. He applied to the PPP last month to return to the party, and the new leadership will soon make a decision.

The PPP’s popularity continued to rise over the past week. According to the Realmeter poll conducted from June 7 till Friday last week, the PPP scored 39.1 percent of the support rate, up by 1.1 percentage points from the previous week. The ruling Democratic Party scored 29.2 percent, down by 0.5 percentage points.

The poll had a 95 percent confidence level with a margin of error of plus or minus 2 percentage points. More details are available on the homepage of the National Election Survey Deliberation Commission.