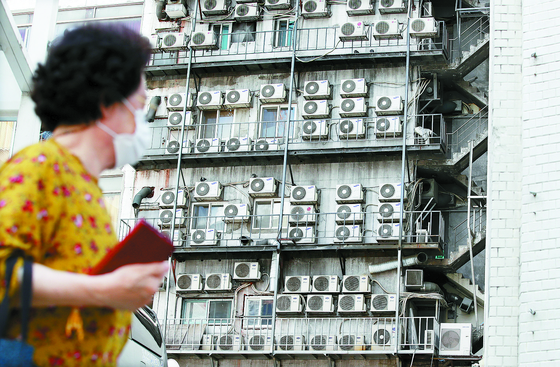 Air conditioners cooling units in a building in Seoul on Sunday. The rising temperature has driven many people to turn on their air conditioners, resulting in drops in power reserves. [NEWS1]

The heat is on, and with more people staying home due to social distancing requirements, a risky amount of power is being used.

According to Korea Power Exchange on Sunday, the country's power reserve ratio, the cushion beneath its full capacity, has been around 10 percent since July 12.

While 10-percent is considered stable, a drop to 5 percent or lower could lead to a major national blackouts as experienced in 2011.

Power consumed peaked on July 15 at 88.6 gigawatts, breaking the previous record set in 2018.

As temperatures continue to rise, sales of air conditioners and other cooling systems have been surging.

According to ETLand, a shopping mall specializing in electronics good, air conditioner sales between July 7 and 13 rose 188 percent compared to the same period last year.

Even when compared to the previous week, or between June 30 and July 6, air conditioner sales were up 44 percent.

Air conditioner sales at Lotte’s Hi-Mart electronics chain have doubled compared to a year ago.

“In some parts of the southern regions, installation of air conditioners have been delayed [because of rising orders],” said Lee Jae-wan, a Hi-Mart official.

The Korea Meteorological Administration projects this summer could be as hot as 2018, when temperatures rose to their highest in 111 years, and warns a heat dome could form above the Korean Peninsula, trapping in heat.

Temperatures during the day could start hitting 40 degrees Celsius (104 Fahrenheit), it said.

The Ministry of Trade, Industry and Energy is expecting power demand to peak for this year between Wednesday and Thursday, with power reserves falling to between 4 and 7.9 gigawatts, which would bring the ratio down to 4.2 and 8.8 percent.

It projects maximum demand to peak at around 93.2 gigawatts, breaking July 15’s record.

If demand continues to surge and power reserves fall below 5.5 gigawatts, the government could initiate energy emergency measures for the first time in eight years.

They could force office buildings and factories to turn off cooling systems as well as other power-consuming systems, including automatic doors and even copying machines.

Households would be encouraged to conserve energy as well.

The government said it is taking its own steps to prevent blackouts.

The Nuclear Safety and Security Commission on July 9 gave conditional approval for the operation of Shin Hanul nuclear power plant’s unit 1, which has a 1,400 megawatt capacity.

This was a surprise, as the Moon Jae-in government has championed on cutting back nuclear energy and replacing it with renewable energy, citing safety reasons.

“We expect demand to peak between July 21 and 22 when the heat piles on,” said a spokesperson for the Energy Ministry. “However, we are making preparations including securing sufficient supplies including the [recently] added nuclear reactor.”