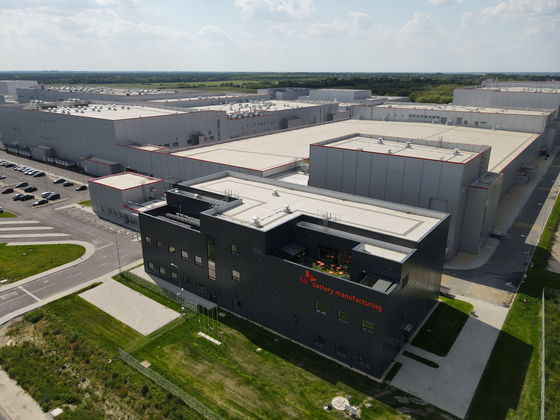 SK Innovation's second electric vehicle battery plant in Hungary, which is scheduled to operate by the first quarter of 2022. [SK INNOVATION]

SK Innovation will get a 90 million euros ($106.2 million) subsidy from the Hungarian government for its second electric vehicle (EV) battery plant, the company said Sunday.

It was exceptional that the company got approval from the commission so quickly, according to SK Innovation.

The European Commission’s decision was based on a conclusion that SK Innovation’s battery plant will contribute to developing the economy of countries in the European Union, and create new jobs, SK Innovation said in a statement.

The plant, which will be located in Komarom, northwestern Hungary, is scheduled to start operating by the first quarter of 2022 with annual production capacity of 9.8 gigwatt-hours (GWh). It is already under construction.

SK Innovation has a factory nearby with 7.5 GWh capacity. In January, SK Innovation announced it would invest 1.27 trillion won ($1.1 billion) to build a third facility, with the goal of starting mass production in the first quarter of 2024.

The Hungarian government told the European Commission that SK Innovation has many global automakers as customers including Germany’s Volkswagen and Daimler AG, China’s Beijing Automotive Group and Korea’s Hyundai Motor and Kia.

SK Innovation has an EV battery order backlog amounting to 1 terawatt-hours, enough to power about 14 million EVs, the company said during a press event earlier the month. That is significantly more than the 60 gigawatt-hour EV battery backlog SK Innovation had in 2017.

SK Innovation is the world’s sixth biggest supplier of EV batteries, according to market tracker SNE Research. China’s CATL was the biggest as of May, followed by Korea’s LG Energy Solution and Japan’s Panasonic.