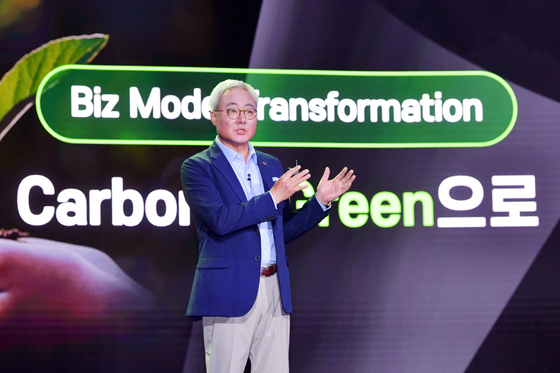 
SK Innovation said Thursday it is considering spinning off its battery business and listing it in the U.S.

“In order to develop SK Innovation’s battery business, a lot of resources are needed and spinning off is considered one of the options to achieve that,” said Kim Jun, CEO and president of SK Innovation, in a media and investor event held Thursday.

“In terms of an initial public offering, the best timing would be when the company is able get the right valuation from the market," Kim continued. "We are considering a Nasdaq listing or dual listing on Nasdaq and where the company's business is based as possible options."

SK Innovation, an oil refiner and battery maker, declared Thursday it would change the company’s business identity "from carbon to green." It said it would increase its so-called green assets -- assets related to eco-friendly businesses such as EV batteries -- from a current 30 percent of the total to 70 percent by 2025.

SK Innovation was founded as an oil refining company in 1962.

The company said it would invest 30 trillion won over the next five years to achieve those objectives, 18 trillion won of which will be dedicated to the battery business.

SK Innovation said it has an electric vehicle (EV) battery order backlog worth 1 terawatt-hours, which roughly translates to 130 trillion won ($115 billion). That is significantly more than the 60 gigawatt-hour EV battery backlog SK Innovation had in 2017.

“We expect to be one of the global top three players in terms of monthly sales by the end of next year,” said Ji Dong-seop, chief of SK Innovation’s battery business during the event.

SK Innovation is currently the world’s sixth biggest supplier of EV batteries, according to market tracker SNE Research. China’s CATL was the biggest as of May, followed by Korea’s LG Energy Solution and Japan’s Panasonic.

Ji said the sooner the spinoff happens, the better for the battery business to grow.

"The battery business is expanding at a fast pace and we need a lot of investment," he said. "We have been making 2 to 3 trillion won in investments every year recently. In order to not miss the investment timing, we want the spinoff to happen fast."

"We will ultimately reach a virtuous cycle where we recycle 100 percent of plastic produced by SK Global Chemical."