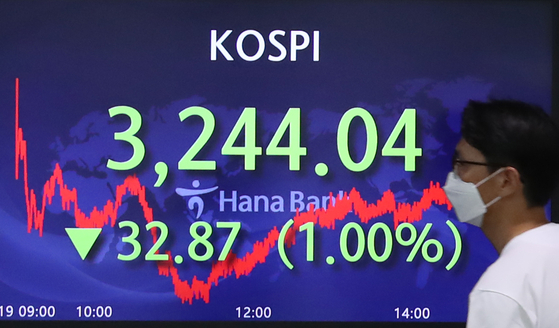 A screen in Hana Bank's trading room in central Seoul shows the Kospi closing at 3,244.04 points on Monday, down 32.87 points, or 1 percent, from the previous trading day. [YONHAP]


Stocks retreated 1 percent Monday amid concerns about the resurgence of new coronavirus cases and mixed signals in the U.S. economic indicators. The won fell against the dollar.

Trading volume was moderate at about 1.1 billion shares worth some 12.6 trillion won ($11 billion), with losers outnumbering gainers 679 to 184.

Stocks retreated as the fourth wave of Covid-19 at home weakened investor sentiment for risky assets.

The infection of 247 South Korean sailors in waters off Africa — the worst mass infection case in the recent resurgence of the virus — sent shock waves across Korea, raising concerns about the highly contagious variant.

Most large caps retreated, with losses on tech, auto and financial stocks leading the Kospi’s fall.