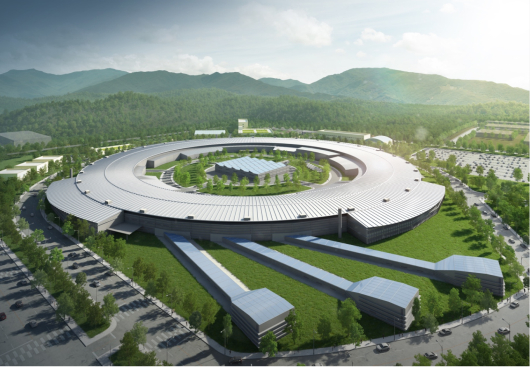 A rendered image of a new particle accelerator in Ochang, North Chungcheong [MINISTRY OF SCIENCE AND ICT]


The Korean government will invest over 1 trillion won ($871 million) to build its own particle accelerator to lead research into novel drugs, vaccines and materials used in electric vehicle batteries by 2027.

The Korea Basic Science Institute (KBSI), a state-run research institute, has been tapped to oversee the project to build a particle accelerator using electric fields in Ochang, North Chungcheong with a 1.04-trillion-won budget earmarked.

A particle accelerator is designed to offer X-ray snapshots of atoms and molecules at work, helping scientists obtain detailed images of molecular structures and chemical analysis. The most famous are at CERN, the European research organization in Geneva, Switzerland.

Sitting on a 540,000-square-meter (133-acre) lot, the upcoming accelerator is a successor to existing facilities in Pohang, North Gyeongsang.

The peak brightness of beam energy at the fourth generation facility will be 100 times brighter than the third generation establishments in Pohang.

“The biggest advantage [of the Ochang accelerator] lies in its capabilities to generate X-rays that are brighter, more coherent and centralized so that it will allow for analysis of tiny, nanometer-sized particles,” said Koh Kyung-tae, a researcher at the KBSI, during an online briefing on Tuesday.

The researcher expects the new accelerator to be used in pioneering research in different fields of high impact including biopharmaceuticals, energy and next-generation materials that are more eco-friendly.

Shin Hyung-shik, head of the institute, addressed concerns as to whether the institute could meet the timeline without any technical glitches.

“Since the particle accelerator is based on technology that is already tested both in and outside of Korea, there will be no delays or problems,” Shin told reporters.

The question arose since the Institute for Basic Science (IBS), a separate state-run research institute, postponed the development of a particle accelerator based on heavy ions, a different type from the Ochang project. IBS initially planned to complete the facility by 2021, but later pushed it back to 2025.

“The heavy ion accelerator is based on a new technology that has not been tried before,” Shin said.

The KBSI aims to use indigenous technologies to construct the Ochang accelerator, although the institute has to develop some parts.

“The tasks left for now include the development of basic components like magnets and cavities,” Koh said.

“Still, we set a specific timeframe for the development and plan to carry out a joint research with Pohang Accelerator Laboratory,” he said.