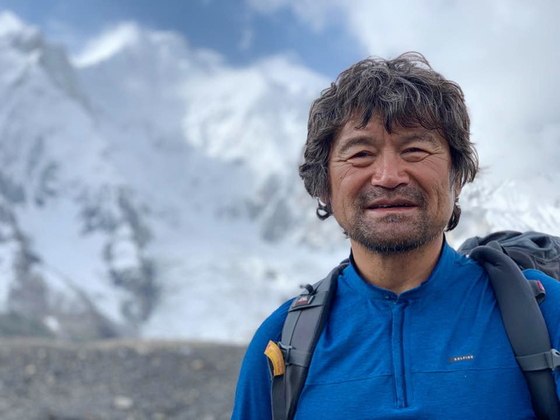 Mountaineer Kim Hong-bin is seen at base camp before climbing Broad Peak on July 19. Kim went missing during his descent from the apex. [YONHAP]


Kim Hong-bin, one of Korea's top climbers, went missing after reaching the apex of Broad Peak on the border of Pakistan and China on Sunday.

There is still a chance that Kim can be rescued.

With the ascension of Broad Peak Sunday, Kim, 57, became the first Korean hiker with a physical impairment to climb all 14 so-called eight-thousanders: the 14 peaks of the Himalayan and Karakoram mountains that are more than 8,000 meters (26,250 feet) above sea level. Kim lost all his fingers to frostbite when he climbed the Denali, the tallest peak in North America, in 1991.

"Sending out a message to those who are struggling in the coronavirus-stricken world," Kim said in a message he sent to members of the Gwangju branch of Korea Alpine Federation, which has been sponsoring his hikes, shortly after reaching the top of Broad Peak at 4:58 p.m. Sunday. "If I, someone with an impairment, can do this, the struggles we face must be conquerable."

Kim was said to be with four porters when he reached the peak, but he was alone when he met with an accident upon descending.

"After reaching the peak, the four porters went back to their camp," said Pi Gil-yeon, president of the Gwangju branch of the alpine federation, during a press briefing at Gwangju City Hall on Tuesday. "We suspect that Kim fell through a crevasse as he was descending alone."

The crevasse was reported to be located around 150 meters beneath the peak. According to the federation, Kim is suspected to have fallen into the crevasse around midnight Sunday.

The last call from Kim was to a close friend of his, around 5:55 a.m. on Monday, after his accident.

The friend reportedly asked Kim if his walkie-talkie had enough power, but all he got in response was, "It's frigid here."

Kim was spotted alive by a Russian rescue team around 11 a.m., according to the federation.

Kim was reported to have been able to communicate and attempted to climb up to the Russian rescuers using ropes and devices they lowered down to him.

Something went wrong in the rescue operation, however, and Kim was said to have fallen even deeper into the crevasse.

Korea's Foreign Ministry has asked the governments of Pakistan and China for assistance.

"Upon receiving a report on Monday, we immediately requested assistance from the governments of Pakistan and China, including helicopter-assistance search," said Choi Young-sam, spokesperson and deputy minister for public affairs at the ministry, in a press briefing on Tuesday. "We have no updates on the situation as of now."

Many people posted messages on social media hoping that Kim would survive and return home on Tuesday, including Korea's president.

"It is dreadful news […] we shall not lose hope as we wait for the successful rescue and safe return of Kim," President Moon Jae-in wrote on his Facebook account Tuesday.

The ascent of Broad Peak was Kim's completion of his goal of scaling all eight-thousanders. He scaled Gasherbrm I, also known as Hidden Peak, in Pakistan in 2019.

Kim attempted Broad Peak in 2015, but had to descend after meeting bad weather 400 meters short of the peak. He wanted to scale it again in 2020, but the expedition was postponed due to Covid-19 concerns.

Korea has lost around 90 of its hikers in the Himalayas over the years, including three brother-hikers Kim Jung-sup, Ho-sup and Ki-sup, who were lost in accidents and avalanches in the Himalayas in the 1970s; Ji Hyeon-ok, the first Korean woman to scale Everest in 1993, who went missing after scaling the highest peak of Annapurna in 1999; and Kim Chang-ho, who was swept by a snowstorm off a cliff on Mount Gurja in the western Himalayas in 2018.