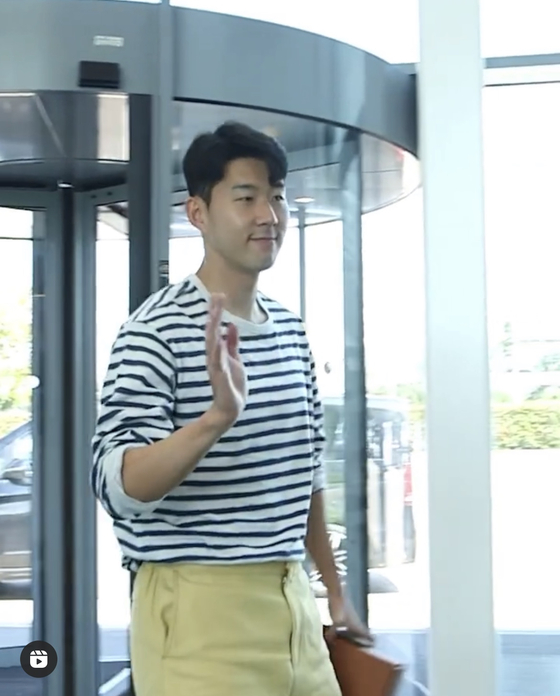 
Son Heung-min rejoined Tottenham Hotspur for training on Monday, two days before the club takes on Colchester in a friendly ahead of the 2021-22 season on Wednesday.

In the video, Son looks pensive with a half-hearted wave to camera and his signature bright smile nowhere to be seen. Son's passive entrance left Tottenham fans speculating on Twitter that the Korean star might not be that excited to return to the club this year with his old mentor Jose Mourinho gone and playmaking partner Harry Kane looking to leave.

Regardless of the concerns, Son's return to the team appeared to go smoothly, with Tottenham sharing another video where he high-fives a teammate and dances with Lucas Moura.

Son and Tottenham face a tough season under new manager Nuno Espirito Santo and potentially without Kane. The team played its first preseason friendly on Saturday, tying 1-1 with League Two side Leyton Orient. Wednesday's game will be with another League Two side, Colchester.

After playing a few more friendlies, Tottenham will begin their Premier League season with a game against Manchester City on Aug. 14.

A new contract for Son has been in the works since last year, although he is still contracted to play at the club until 2023. Son is currently earning an estimated £140,000 per week under a contract signed in July 2018, according to the Guardian. The new deal was expected to increase his salary to about £200,000 a week, which according to Football Insider it has, taking into account his status as one of the top attackers in the Premier League.

No information on the possible new contract has been confirmed by Tottenham or Son's representatives.