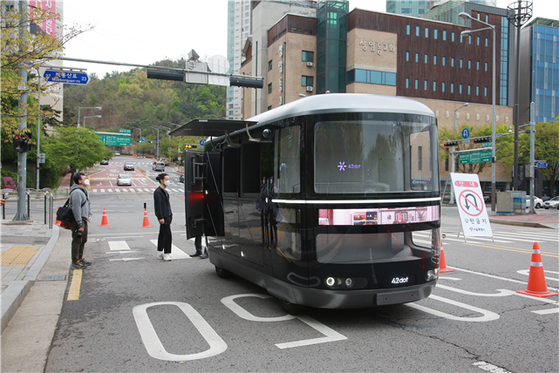 
Starting from October, self-driving cars will hit the road on Sangam-dong in Mapo District, western Seoul.

A new ordinance by the Seoul Metropolitan Government went into effect Tuesday to promote commercialization of driverless cars in the city.

The ordinance, the first of its kind in Korea, includes the establishment of a steering committee, detailed safety standards, and grounds for administrative and financial support.

Private operators will be recruited later this month to introduce self-driving buses that circulate around the Sangam district.

Autonomous cars will also go on designated routes, and specialized services for the disabled will be offered.

The self-driving transport service is supposed to be expanded next year to go beyond passengers and offer freight transport, such as delivering heavy furniture or grocery deliveries from supermarkets to homes.

A mobile application will be launched in which the progress of the self-driving cars can be viewed in real-time.

The city plans to provide administrative and financial support to the new system, including creating dedicated parking areas, bus stops, and payment systems.

Before issuing any license, the city's experts will check the system's self-driving capabilities.

"We will provide all support to establish self-driving cars as an essential means of transportation for all citizens, and to help the domestic self-driving industry lead the global market,” Baek Ho, a senior Seoul official in charge of city transport, said.