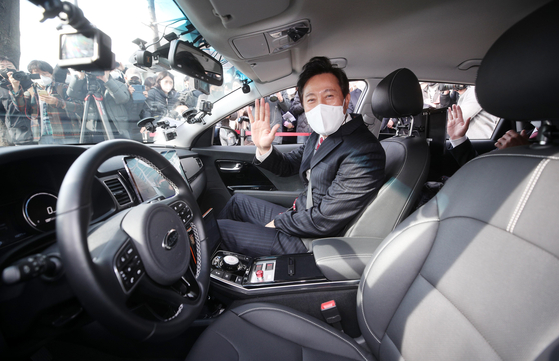 
Seoul will kick off its self-driving vehicle service on Tuesday, one major step toward commercializing its driverless car project.

The Seoul Metropolitan Government announced Monday that it will operate three driverless cars open to the public that will autonomously circulate around a designated route in the self-driving test bed area of Sangam-dong in Mapo District, western Seoul.

Effective Tuesday, three driverless cars will be available to take passengers around the Digital Media City (DMC) Station, nearby apartment complexes, and office areas in the Sangam area.

Vehicles can be called through the autonomous vehicle application TAP!, which can be downloaded from Apple’s iOS App Store or Google’s Android Play Store. The service will be operated through Saturday only for those who have already made a reservation. It will be available to the public from Dec. 6.

The city will provide the service for free for about a month and then collect travel fares via the app from January next year.

Fares proposed were 1,200 won ($1) for buses and 3,000 won for cars, after going through a resolution by a steering committee in accordance with the relevant ordinance. The actual fee for passengers will be lower, and prices will depend on the operator of each self-driving vehicle, the city added.

In commemoration of this operation of self-driving vehicles, a proclamation ceremony was held at 12:30 p.m. Monday at the S-Plex Center in Sangam-dong.

Seoul Mayor Oh Se-hoon was the first passenger for the self-driving cars and traveled about 2.9 kilometers (1.8 miles), from the S-Plex Center to the front of Gugak Broadcasting System.

At the ceremony, Mayor Oh awarded self-driving business licenses to the two operators of the three cars, 42dot and SWM, for first starting paid transportation service of autonomous vehicles.

“Self-driving is no longer a technology of the distant future — it is already upon us,” Oh said. “We plan to operate urban, self-driving buses around the Cheonggyecheon stream early next year, and cooperate with private companies in Gangnam to expand the operation of autonomous vehicles such as robotaxis.”