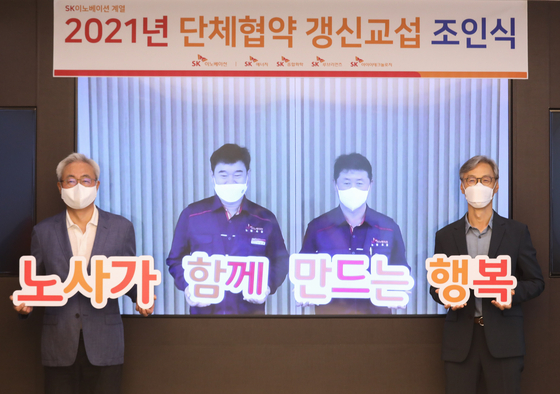 
SK Innovation and its unionized workers have reached an agreement on employee benefits including vacation and educational support, the company said Thursday.

The deal was reached in three weeks, a record for the company, without any industrial action.

Under the agreement, SK Innovation promised to improve the holiday system for employees and support educational expenses for workers' children. The company also said it will look into ways to change the current shift working system and improve the working environment.

Management and the labor union had their first meeting in Ulsan on June 16 and then reached a tentative agreement on labor issues on July 8. On Thursday, a final agreement was reached as 88.5 percent of unionized workers agreed to the terms according to a vote taken on July 15.

Some 95.8 percent of the labor union participated in the vote. That’s an unusually high rate of approval compared to other companies, according to SK Innovation.

“The management and union reached a tentative agreement in only about three weeks," SK Innovation said. "This is a result of making efforts to find reasonable solutions by having constructive communication between the management and the union based on our firm trust."