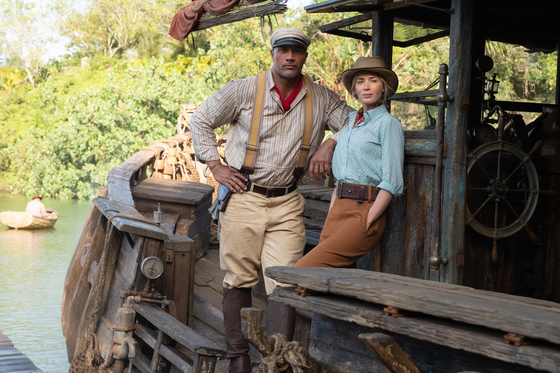 
Dwayne Johnson and Emily Blunt are hoping that their upcoming Disney film “Jungle Cruise” will offer audiences a chance to go on an epic adventure and help revive the movie industry which continues to struggle during the Covid-19 pandemic.

“Jungle Cruise,” which hits local theaters on July 28, is set in 1917 and follows British scientist Dr. Lily Houghton (played by Blunt) and her brother, who hire a riverboat captain named Frank (played by Johnson) to take them on an expedition to find the Tree of Life, which legends say has “unparalleled healing powers and will change medicine forever.”

In an online event with Korean press on Thursday, Johnson said portraying Frank and his action sequences was unlike any role he'd taken on before.

Johnson said his main aim for the film was to deliver a performance different from his previous roles. “I wanted to fit the times, [of the film set in] 1917. I want to immerse myself in the role and try as best as I could to get lost in the character. I covered up my body, wore a hat, wore suspenders and didn't have the character rely on my physicality or physical appearance as I have often done in my movies in the past.”

Blunt says she was attracted to the progressive attitude of her character, which was ahead of the times.

“I really did love playing this character, I loved it from the moment that I started reading this script,” Blunt said. “With all of that tenacity and rebellious qualities, she wasn’t wanting to conform to the times and all the restraints around women around 1917. But the thing that struck me about my character and DJ’s [Dwayne Johnson] character — it’s their humanity. They're not slick action heroes, [they] are reminiscent of Indiana Jones because he fell on his face, he's terrified of snakes [and] he messes up. It’s more enjoyable to watch people who’re ill-prepared for the task at hand, get themselves out of the task at hand.”

Blunt also praised how natural Johnson was in action sequences.

“It takes me a long time to pick up choreography,” she said. “So I was so impressed when he kind of waltzed in there last minute and he goes, ‘show me the fight’ and they would show him it and he would pick it up like that. I know he comes from that world — it’s almost like that dance he used to have to do when he was a wrestler — it was just really impressive, the immediacy of it, the natural physicality and ease and body awareness.”

The two actors said they would definitely be on board if Disney decided to make a sequel to “Jungle Cruise.”

“Of course it depends on the audiences all around the world, certainly Korea too as well, that will have a hand in whether or not we move ahead with the sequel,” Johnson said. “But these early reactions to the movie have been so positive that they led to Disney breaking dialogue about what a sequel would look like, and I can’t wait.”

Blunt says the upcoming “Jungle Cruise” is all about the nostalgia of going on a jungle cruise ride at Disneyland.

“I do feel that the film has been infused with all of that nostalgia people feel about the ride,” she said. “And also the nostalgia that people feel about going to Disney for the first time and experiencing that. It’s really been seared into people’s childhood memories. I think that’s what we tried to capture with the spirit of the film. It’s so uplifting, it’s joyful, it’s actually quite profound and emotional at times. We wanted to create the full spectrum of what nostalgia feels like to people.”