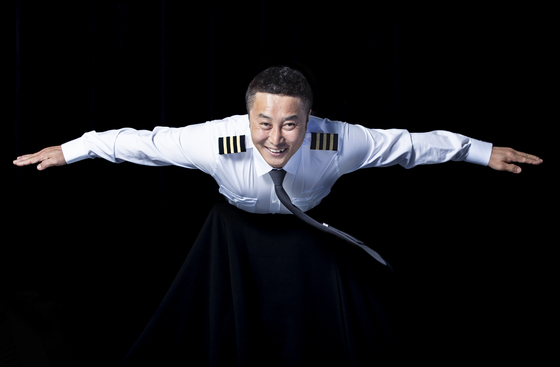 
Comedian Kim Byung-man has proven he does more than just make people laugh. Recently, Kim has become an inspiration to many with all the adventures he has taken in the past decade.

Kim's most recent achievement was getting a commercial pilot license in March after acquiring a countless number of certificates. In the past three years, while studying to get the license, he took 31 written tests and had flown about 210 hours, then finally earned his license after ample time to study due to the pandemic.

The comedian, star of the decade-long program “Law of the Jungle” on SBS that takes him into the wilderness overseas, saw his international gigs get put on hold last year. Still, the pandemic didn't stop him from embarking on new adventures for the show, using skills he had learned through years of filming to survive in the wild. Kim has licenses allowing him to do various activities, from driving a boat to teaching others how to scuba dive. He even got some licenses to make city life easier to manage, like by learning plumbing skills and operating fork lifts and excavators.

He first got the idea to fly a plane when he was the ambassador for the Air Force in 2015 and got to take a ride on one of the F16 jets. At the time, he was also interested in skydiving, so he started to dream of operating an aircraft.

Although his busy filming schedule never allowed him enough spare time to study for a commercial pilot license, he found an opportunity when he hurt his back in 2017. Depressed by thinking that could mean the end of his career, one pilot he knew from his skydiving days came to see him, and that’s when Kim asked the pilot to teach him how to operate a plane. From that moment on, his journey to fly began.

To pass all the written tests, he sat in front of a desk for 10 hours a day. He even brought his books to filming sites to study.

“I was the one who stayed very distant from studying for hours back in school," he said in an recent interview with the JoongAng Ilbo, an affiliate of the Korea JoongAng Daily. He had to reassure himself by telling himself that the reason he didn't do well with school work was because he didn't put much effort toward it, not that because he didn't have an aptitude for studying. That's how he could make things happen.

Kim's desire to master everything and anything he set his mind on stems from doing a variety of entertainment shows — in particular, KBS's "Gag Concert." He was in charge of one segment called Dal-in, which can be translated to expert or master, for over three years. He played the role of about 250 different characters specialized in different skills, from juggling to walking on a rope.

When asked by the SBS Entertainment team director what he wants to do next, he said he dreams of making his version of "The Adventures of Tom Sawyer." He said he could do well in activities like picking up fruits from a tree and building a house from scratch. That's how the wildlife reality show "Law of the Jungle" began. Kim traveled all over the world, from the tropical forests in Africa to the snowy mountains in Siberia. Other staff who join in on the adventures are changed regularly, but Kim stayed with the show. The adventure team even got the nickname Byung-man jok, meaning Byung-man tribe.

For the past 10 years, Kim has not had much time to share his jungle stories as he was busy with filming schedules that take him overseas. In this interview, Kim shared more about what it is like to be someone that constantly takes on challenges in the jungle and in real life. Below are edited excerpts. 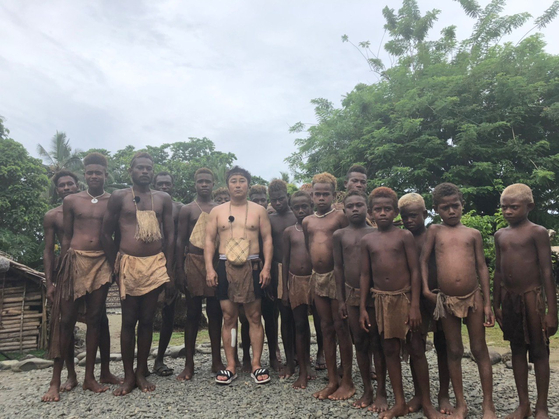 Comedian Kim Byung-man poses with the villagers he met during the filming of "Law of the Jungle." [KIM BYUNG-MAN]


Q. What does it feel like to have led the show for the past 10 years?
A. I need to sweat to feel like I have really worked. People ask me why I take the difficult road when there is a more comfortable road available right in front of me. But I find this road entertaining. After spending time in a jungle for 10 years, nature feels more like home than my actual home. Everyone [on the show] is a bit depressed because we can’t go to these wild places due to the pandemic.


Q. Why do you miss being in the jungle?
A. You would think it would smell bad in mud, but that’s not the case. There are layers of forests, so the air is clearer than in the city. Deep inside the jungle, there are not that many bugs and it really is just very clean. And you don’t really get distracted with petty thoughts. You get simpler and you get more curious. You wonder what certain things in the forest would taste like and whether you can eat them. You only think about what to eat, how to set fire and where to sleep. You don’t worry about what social circle you want to be in. Natives in the jungle are really pure, and you can totally communicate with them utilizing body language. I’m from the countryside [in North Jeolla’s Wanju County], and I’m completely naked in photos from when I was young, just like the natives in the jungle. I just feel like I’m reliving moments from when I was younger when all I did was run around and play.


Q. Were you always adventurous?
A. I used to be very introverted and get scared easy, but when it comes to filming in the wild, I was more [experienced] than anyone else that joined, so I have become familiarized with what one should do in the jungle. I was scared of water, so I learned how to scuba dive, and I even learned how to skydive just in case of an emergency. Challenging myself to the extremes really helped me relieve stress I got from the entertainment scene. Doing [new things] is also a process of collecting skills that makes me who I am. 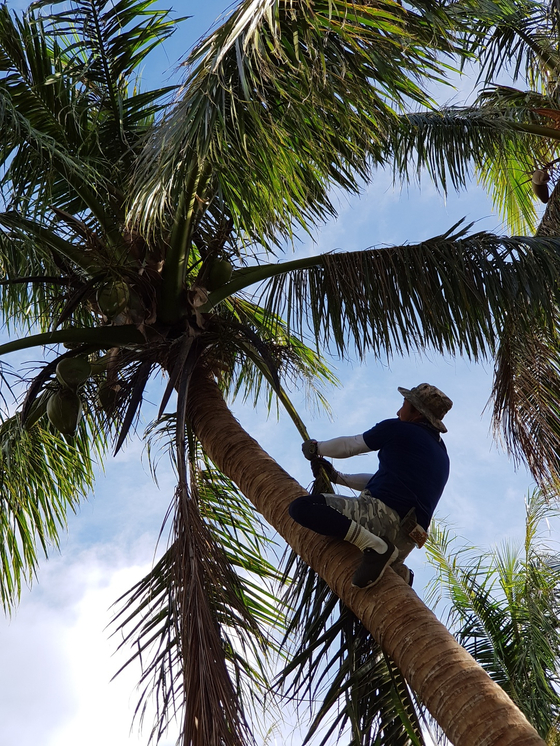 Comedian Kim Byung-man climbs up a tree during his filming for SBS show "Law of the Jungle." [KIM BYUNG-MAN]


Q. Hasn’t it been difficult to continue doing what you used to do, now that you are in your 40s?
A. Just like natives acquire the know-how on catching wild animals without actually chasing them down, I have acquired some of those skills of my own. [The recent filming of the show in Korea’s wild] was so easy, and it felt like I was just a tour guide for the rest of the staff.


Q. What kind of message do you want to deliver to your audience?
A. I want them to feel like they can do things, just like how Kim Byung-man learned how to operate an airplane in his 40s. I want people to have some kind of vicarious satisfaction. Some say [I'm able to do what I do now] thanks to the broadcasting companies' entertainment shows, but I got here from just delivering newspapers around. My dreams and goals continue to change, and new ones pop up. I think my dreams will stop popping up maybe by the time I die. I expect airplanes will become another popular means of transportation for the general public, and then I could be the one who makes “going to Yeosu to see the night sea,” or “going to Jeju to eat raw seafood” part of a TV program. My dream is to take another pilot with me in a plane that I operate, and then make a jump for it and go skydiving from there. There are so many other things I want to show you outside of the jungle.