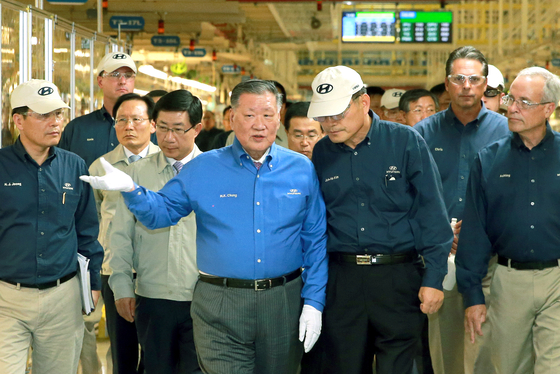 Chung Mong-koo, honorary chairman of Hyundai Motor Group, was  inducted into the Automotive Hall of Fame at the 2020/2021 Induction and Awards Ceremony in Detroit on July 22.

The Automotive Hall of Fame, founded in 1939, recognizes automotive pioneers from a range of industries.

Chung was an honoree for the year 2020 along with Thomas Gallagher, former CEO of Genuine Parts Company, Jay Leno, an American comedian and automobile aficionado who hosted “Jay Leno’s Garage,” and Helene Rother, one of the first women in automotive interior design at General Motors.

Last year’s ceremony was postponed due to the coronavirus.

Honorees for 2021 included C.R. Patterson and his son Frederick Patterson, who founded the U.S.’s first and only African-American owned auto company, and Charlie Wiggins, a motor sports racer and engineer. 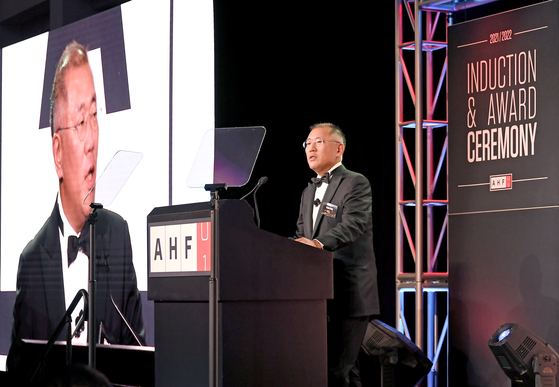 Hyundai Motor Group Chairman Euisun Chung makes an acceptance speech on behalf of his father Chung Mong-koo, who was inducted into the Automotive Hall of Fame at an event in Detroit on July 22. [HYUNDAI MOTOR]

Chung was recognized for his dedication to making “Hyundai Motor Group into a leading global automotive group based on his strong leadership and dedication for quality,” according to the Automotive Hall of Fame.


The organization took notice of Chung’s persistence in improving quality.

“Chung is known for his passion for quality. ‘Quality is the absolute benchmark of our product and brand competitiveness,’ Chung says, pointing to the importance of producing vehicles that customers can trust at any time,” the hall of fame said.

The 83-year-old Chung is the first Korean in the hall of fame.

The induction ceremony was attended by Chung's son and successor as chairman of Hyundai Motor Group, Euisun Chung.

“If my father were here, he would say he owes this honor to our employees, dealers and fantastic customers. My father continued the legacy of my grandfather Chung Ju-yung, who founded Hyundai. He [Chung Mong-koo] expanded the group’s presence globally and continued to pursue excellence in quality. He made the group something that employees and customers can all be proud of.”