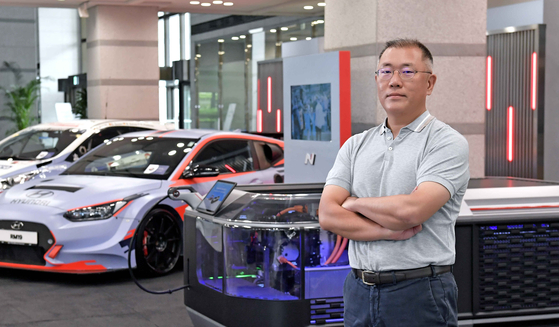 The Issigonis Trophy, named after Greek car designer Alec Issigonis, is given every year to a figure in the auto industry who had made notable achievements.

“In the last decade, the Hyundai Motor Group has grown into one of the world’s leading car firms, and chairman Euisun Chung has been key to that transformation,” Steve Cropley, editor-in-chief of Autocar magazine, said in a release.

“We are proud to award him this year’s Issigonis Trophy to recognize his achievements. The transformation made by the company is unmatched in the industry in recent years.”

After becoming the group’s chairman last year, Chung has been active in introducing an electric vehicle (EV) lineup through the dedicated platform E-GMP and expanding its hydrogen business, launching a fuel cell system brand called HTWO.

“What lies at the heart of our efforts is our single-minded focus on serving and empowering our customers,” Chung said. “Through a considered approach, we will create more opportunities and oil the wheels of ‘progress for humanity.’”