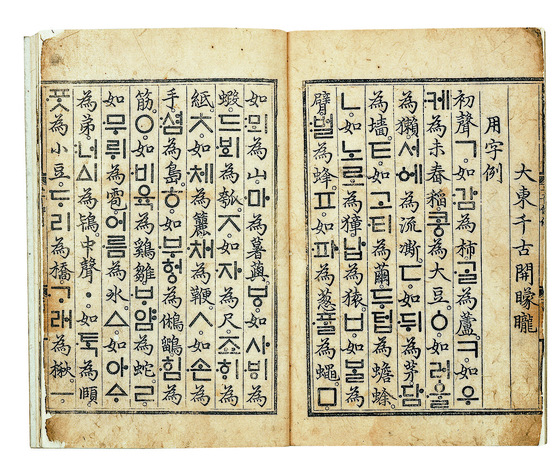 It is one of Korea's most important texts.

The name translates to “The Proper Sounds for the Instruction of the People.” It has two parts: the Yeui section, which explains why hangul was created, and the Haerye section, which details principles, usage and gives examples of the writing system. The Yeui is replicated in several other ancient documents, but the Haerye is extremely rare. It’s a state-designated National Treasure and is also registered on Unesco’s Memory of the World list.

What if you could own this priceless artifact? Or more precisely, be one of 100 owners of a digital version?

Get your cryptocurrency wallet out. The Kansong Art and Culture Foundation, which owns “Hunminjeongeum,” announced July 22 a plan to create limited edition non-fungible tokens, or NTFs, of the Haerye section.

What is for sale is not a mere jpeg file. All 100 buyers will have full ownership of a digital copy with a unique serial number, purported to be completely unique and theft proof. Therefore, as NFT evangelists argue, it has attached value and an aura of authenticity, unlike run-of-the-mill digital files.

But becoming an owner of the “Hunminjeongeum” in NFT doesn’t mean that you can go over to the Kansong Museum and cozy up to the original.

“There will be only 100 of them produced, each one priced at 100 million won,” the foundation said in a statement.

The foundation believes it has come up with an innovative plan that will help its cash-strapped bank account “so that we can continue to research and promote Korea’s cultural heritages," the foundation said.

"It's also an opportunity to permanently preserve the ‘Hunminjeongeum,’ which symbolizes Kansong Jeon Hyeong-pil’s cultural patriotism, as a one-of-a-kind digital asset.”

The Kansong Art and Culture Foundation, founded by legendary collector Jeon (1906-62), placed three art treasures up for auction last year, citing financial difficulties. Two -- a gilt-bronze standing Buddha dating to the Unified Silla Period (668-935) and a gilt-bronze standing Bodhisattva dating to the Three Kingdoms Period (18 B.C.- A.D.660) –- were purchased by the National Museum of Korea after failing to win any bids at auction.

The museum is said to have paid a little less than 3 billion won for both treasures.

"Haeak palgyeong and Songyu palhyeondo" (Album of Eight Scenic Views of Seas and Mountains and Eight Confucian Scholars of the Song Dynasty) by Gyeomjae Jeong Seon (1676-1759), a renowned landscape painter from the Joseon Dynasty, also went up for auction in last July, but no bids were made for that either. 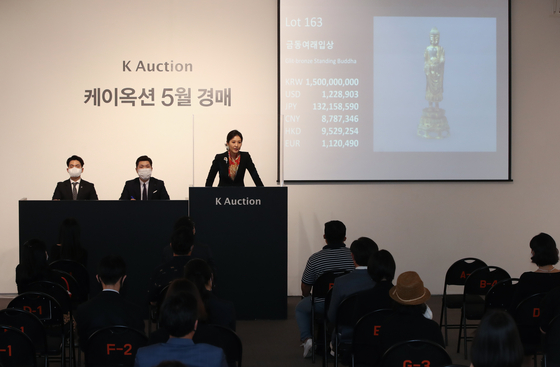 
The Kansong Art and Culture Foundation’s decision is stirring controversy as it’ll be the first national treasure to be traded on a blockchain platform.

NFTs have emerged as the next big thing in the world of art. Starting with the sale of an NFT of an artwork by Beeple at Christie’s for $69 million in March, they’ve been hard to ignore. Many artists and investors have jumped on the NFT bandwagon ever since, selling, purchasing and reselling NFTs for large sums. The Uffizi Gallery in Florence announced that it’s turning some of its valued artworks into NFTs and managed to sell a digitalized Michelangelo’s “Toni Tondo” (1505-06) for €140,000 ($170,000) in May.

The ownership of “Hunminjeongeum” is with the Kansong Art and Culture Foundation, though it is obliged to report to the Cultural Heritage Administration if it were to take a state-designated national treasure outside the country, or conduct any form of actions that affect the artifact.

“Therefore, we have no say in what to do or not to with ‘Hunminjeongeum,’ as long as the original copy is not physically affected,” said Lee.

“If the foundation has to film the Haerye segment of the ‘Hunminjeongeum’ to create NFTs, it should get the chief of the Cultural Heritage Administration’s approval. But if that’s not the case, the administration has no right to interfere with the owner of the artifact, who wishes to create a secondary product using the original,” said Lee.

Lee said Unesco will probably have a “similar stance” to the administration's.

The Kansong Art and Culture Foundation explained that filming is not necessary for “Hunminejongeum” as they’ll be using existing digital files.

“The NFT project is being carried out in collaboration with blockchain company Publish. The image of Hunminjeongeum Haerye will be minted using the Ethereum blockchain,” the foundation said.

Lee says the issue is that “Hunminjeongeum” is regarded as a national treasure that is so significant that the public feels it’s not right to commercialize it in any way whatsoever.


The beloved and priceless “Hunminjeongeum”

Because of the significance of hangul to the Korean civilization, “Hunminjeongeum” is one of the most treasured artifacts by Koreans. It is said that Jeon purchased the book in 1940 for 11,000 won, which is the equivalent of 3 billion won today.

In 2008, a man named Bae Ik-gi, a collector of ancient artifacts in Sangju, North Gyeongsang, informed the Cultural Heritage Administration that he also had a copy of “Hunminjeongeum” with the Haerye section, claiming he came across it when he was sifting through his collection of ancient documents. CHA concluded that the book was indeed authentic, in good shape and even has a footnote that the Kansong version lacks.

It was later revealed that Bae’s copy of “Hunminjeongeum” belonged to antique dealer Jo Yong-hun, who decided to donate the book to the state just before he passed away in 2012. Bae and CHA went into a long legal battle until a court finally ruled in favor of CHA in 2019, stating that the ownership rights of the Haerye segment of the “Hunminjeongeum” belongs to the administration.

However, Bae is still holding the treasure hostage, asking about 100 billion won for it. Making matters worse, a fire broke out in Bae’s residence in 2015, destroying a part of the “Hunminjeongeum.” The CHA valued the “Hunminjeongeum” that Bae possesses to be worth over 1 trillion won in 2015. 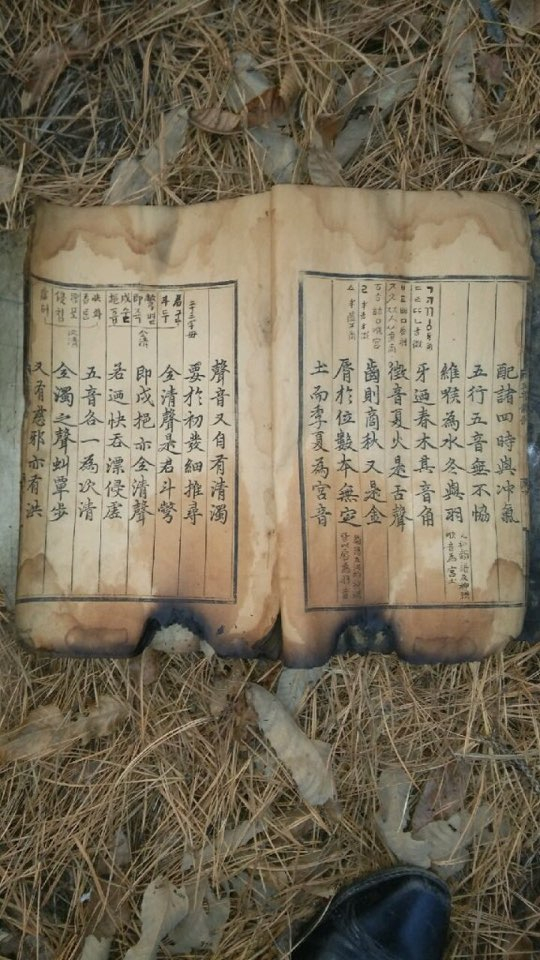 "Hunminjeongeum" Haerye that Bae Ik-gi holds hostage of was partially destroyed in fire in 2015. [BAE IK-GI]


Such drama has only made the Korean public more worried about the artifact, which translates into mixed feelings about the Kansong Art and Culture Foundation’s “Hunminjeongeum” NFT announcement.

Some welcomed Kansong’s latest project, saying it should be helped out in a time of financial difficulty. It was Kansong's Jeon who dedicated his life and fortune to buying and preserving the country’s treasures during the Japanese colonization of Korea so that artifacts didn’t get spirited away by the Japanese. However, others are worried about the plan, and confused about NFTs.

Some make the distinction between a purely original NFT, or an NFT that replaces an artifact that has been lost or damaged, and an NFT of a perfectly intact national treasure.

“We can’t say what to do to a cultural property owner,” said Jung Jin-hee, an art historian and expert advisor to Cultural Heritage Administration. “But as an art historian, I believe it’s not a proper thing to do to sell a version of the Haerye segment of the ‘Hunminjeongeum' [as NFTs] when the physical copy exists in perfectly good shape. I could understand the objective if it was the copy in Sangju that’s partially destroyed and its whereabouts are unknown.”

One NFT investor, who wished to remain anonymous said he would be interested in buying the “Hunminjeongeum” NFT if only one was created, not 100, saying such a “large quantity loses ‘originality.'”

In fact, experiments are ongoing to find out which format has more value – an NFT version or the real physical copy – when both are out on the market. 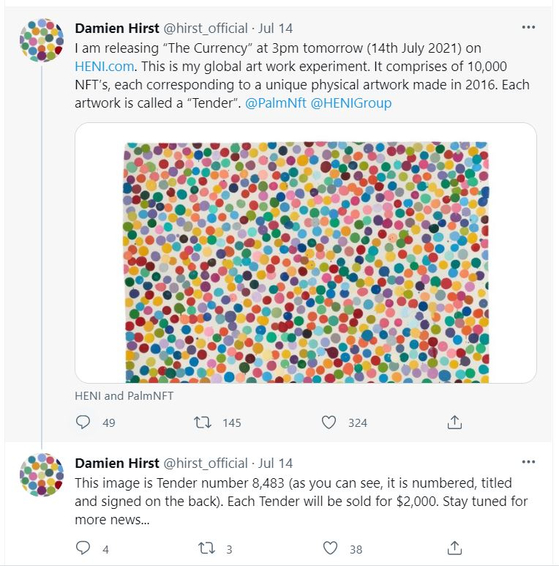 
Last week, the application came up for auction again - this time alongside an NFT version. As of Sunday, the physical copy had received a top bid of $36,000 and the NFT 1.00 Ethereum, which is equivalent to $2.037.

On July 14, British artist Damien Hirst launched a global artwork experiment titled “The Currency,” which is comprised of 10,000 NFTs corresponding to 10,000 physical art pieces. Buyers will pay $2,000 and be given a year to decide whether they want the digital or the physical version. Once one is selected, the other will be destroyed.

The artist wrote on Twitter, “You can’t buy both.”