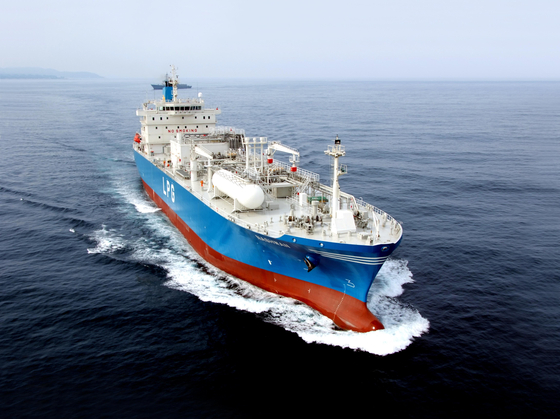 
Shipbuilders have hit 70 percent of their targets for orders this year, but earnings are not living up to expectations.

An increase in prices for steel plate has hurt their bottom lines, along with sluggish order books from last year.

Samsung Heavy Industries (SHI) has achieved 71 percent of its target of $9.1 billion, and Daewoo Shipbuilding & Marine Engineering (DSME) 80 percent of its $7.7 billion target.

In contrast to the orders coming in, KSOE reported an earnings disappointment in the second quarter.

It reported a 722.1 billion won ($650 million) net loss compared to 400 million won in net profit in the same quarter last year. Its sales fell 3.3 percent in the second quarter to 3.8 trillion won.

Analysts predict SHI and DSME will each report net losses of around 100 billion won for the second quarter.

More stringent environmental regulations and a general rise in demand for marine transportation contributed to a rise in ship orders, according to Moon Sung-hoon, a spokesperson for KSOE.

But KSOE saw a weak bottom line because it “reserved money for the projected spike in the price of steel plate,” Moon added.

Steel plate typically accounts for around 20 percent of the total cost of building a ship.

The price of steel plate increased by around 120,000 won per ton in the first half of the year, according analyst Lee Dong-heon from Daishin Securities, a 20 percent increase from a year ago. Prices for the second half are still being discussed between shipbuilders and steelmakers, but are projected to rise around 300,000 won per ton, according to Lee, or up 40 percent from the first half.

Steelmakers point out that the price of iron ore has almost doubled this year compared to last. It is now being traded above $200 per ton.

The impact of the increase in steel plate prices on shipbuilders is “very big,” said Lee. “But if a vessel's price also rises in accordance with the price of the steel plate, it will result in growth for the shipbuilders by raising their sales.”

A key factor for shipbuilders will be negotiating a higher price for LNG ships to be ordered by Qatar Petroleum in September or October.

Last year, the three domestic shipbuilders inked a 23.5 trillion won deal with Qatar Petroleum to reserve a major portion of their LNG ship construction capacity for the state-run company through 2027.

“If the LNG vessels are priced around $210 million, up 10 percent compared to the current price, expectations for shipbuilders will outweigh concerns over their second quarter earnings,” said Kim Hyun, an analyst at Meritz Securities.

Apart from steel prices, poor orders in 2019 and 2020 also contributed to this year’s sluggish earnings.

In general, it takes around a year and a half to build a ship, and shipbuilders usually receive five payments. The largest amount is usually given right before the ship is delivered.

According to this payment system, shipbuilders’ earnings this year are largely based on the orders they received in 2019 and 2020.

Trading of SHI was temporarily halted following its announcement that it would reduce its capital by cutting the par value of its shares by 80 percent. But before trading was halted, its shares jumped 60 percent from 5,010 won last October to 8,000 won in March.