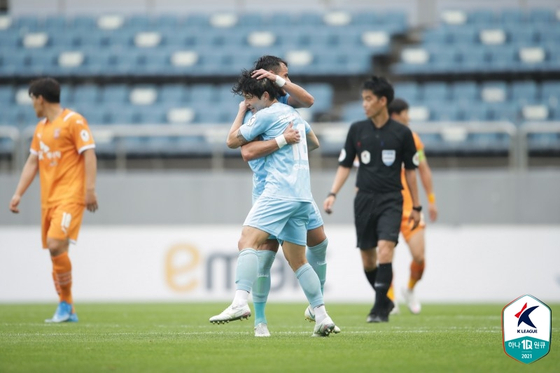 
The Suwon Samsung Bluewings, Daegu FC, Suwon FC and Incheon United picked up the only wins in the K League 1's eight fixtures over the last week, as the league continues without two teams due to ongoing quarantine measures.


Four K League 1 matches were postponed — FC Seoul’s two games against Daegu FC and Jeonbuk Hyundai Motors and Seongnam FC’s two games against Jeonbuk and the Pohang Steelers — after Seoul announced on May 3 that defender Hwang Hyun-soo had tested positive for Covid-19 after appearing as a substitute in a game against Seongnam on April 30.

The last few week's wins suggest a reversal of fortunes may be in the pipeline for the K League's less-dominant clubs. Jeonbuk has topped the league for the last four years with Ulsan trailing for the last two, but both clubs have struggled to pick up wins over the last month, opening the door for some of the league's other contenders.

The Bluewings picked up a 3-2 win against Jeju United at Suwon World Cup Stadium on Wednesday. Having snapped Jeonbuk’s undefeated streak last week, the Bluewings are on an undefeated five game streak of their own and jumped up to third place on the K league table.

Daegu saw less of the ball than Jeju but made it count, with Kim Jin-hyuk scoring the first goal in the seventh minute and Jeong Seung-won adding another in the 54th.

Jeju’s Joo Min-kyu managed to get one back two minutes later, but was unable to repair the damage and the match ended at 2-1. Jeju is without a win for five consecutive games and stays at sixth.

Suwon FC beat Gwangju FC 2-1 with a big comeback on Tuesday at Suwon Sports Complex, with both their goals scored in the last five minutes of the match. Suwon sits at eighth on the table.

Incheon also beat Gwangju 2-1 on Saturday at Incheon Football Stadium and sits at seventh on the table. With four consecutive losses, Gwangju trails in last place.

The K League 1 returns this week with all 12 teams. The midweek fixtures will see Suwon FC face the Steelers on Tuesday and Jeju face Gwangju, while the Bluewings take on Daegu and Jeonbuk play Ulsan on Wednesday.