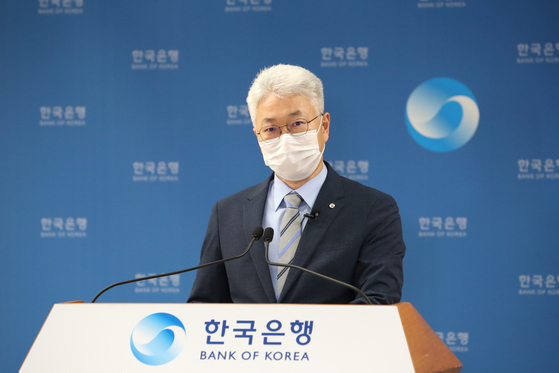 Park Yang-su, director general of the economic statistics department at the Bank of Korea, speaks during an online press briefing held Tuesday. [BANK OF KOREA]

Korea’s economy grew at the fastest pace in more than a decade, according to figures from the Bank of Korea.

The country’s gross domestic product (GDP) in the second quarter was up 5.9 percent on year, according to advanced estimates by the central bank Tuesday.

It is the fastest on-year growth since the fourth quarter of 2010.

Private consumption and government expenditure were major drivers of the growth, according to the central bank.

“As people have become quite used to the situation, effects of the virus on consumption weakened," said Park Yang-su, director general of the economic statistics department at the Bank of Korea during an online press briefing Tuesday.

GDP grew by 0.7 percent on quarter. Quarter-on-quarter growth slowed from 1.7 percent in the first quarter.

"Investment in construction and exports declined,” Park said of the on-quarter figures.

Exports fell by 2 percent in the second quarter compared to the first quarter, as overseas sales of cars and liquid crystal displays fell. Car sales were especially sluggish at home and abroad in April and May due to semiconductor shortages, Park said.

Park said the fourth wave of the pandemic will not likely affect the pace of growth.

“Exports have been recovering fast, which is why we are seeing some slowdown in export growth this quarter, and regarding shortages in auto semiconductors, the situation has been improving from June," the director said.

Park said the bank believes the country's economy will grow 4 percent this year.

"If the country's economy can maintain around 0.7 percent on quarter growth in the third and fourth quarter of the year, 4 percent annual growth is achievable," Park said.

The second supplementary budget of the year, totaling 34.9 trillion won ($30.2 billion), is likely to give a boost to the country's GDP by pushing up private consumption.

“Gov. Lee Ju-yeol said the first supplementary budget, totaling 14.9 trillion won, would push up the country's GDP by 0.1 to 0.2 percentage points," Park said. "As the second supplementary budget is about 2.3 times the size of the first, its impact on the GDP will be greater."

Moody's Analytics said in a release Tuesday that "there is growing pessimism in the South Korean economy. Its vaccination progress has been trending sideways since late June amid a shortage of vaccine."

Separately, the International Monetary Fund (IMF) raised Korea's economic outlook for the year to 4.3 percent. This is 0.7 percentage points higher than the organization's projection made in April and the most optimistic forecast yet by institutions at home and abroad.

The IMF's projection is based on data up to the second week of July, which is before Level 4 social distancing restrictions were imposed in the country due to the fourth wave of the coronavirus pandemic.