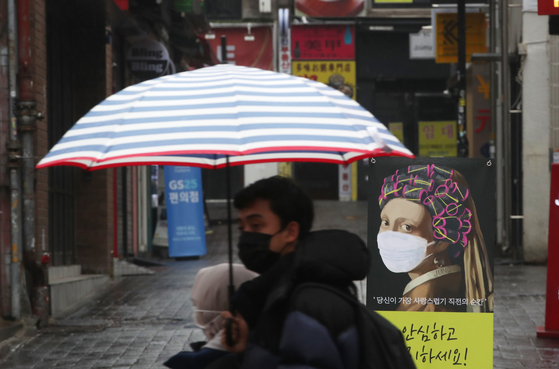 The Myeong-dong retail district in central Seoul is empty on Tuesday. According to the Bank of Korea on Tuesday, private consumption declined by 5 percent last year, the biggest decline since the Asian financial crisis in 1998, leading to minus growth for the country's gross domestic product last year. [YONHAP]

It was only the third time Korea posted negative economic growth. The first time was in 1980 after the second oil shock, when growth was minus 1.6 percent. The second time was in 1998, in the depths of the Asian economic crisis, when GDP growth hit a record low of minus 5.1 percent.

Finance Minister Hong Nam-ki, however, said in a Facebook post Tuesday, "Korea managed to slip by only a little bit, proving the country's economy is strong in a crisis."

Hong added that other major developed nations are projected to do much worse, with GDPs falling three to 10 percent.

"The government had to play its part," said Park Yang-su, director-general of the economic statistics department at the Bank of Korea. "We expect the government's role grew in other countries as well."

"During the first wave of the pandemic, consumption of both goods and services shrank as consumers panicked, but during the recent third wave, services were hit hard while consumption of goods was less affected," Park said.

In November, the central bank had projected that 2020's GDP growth would be minus 1.1 percent. Park said better-than-expected exports in the fourth quarter, led by semiconductors and petrochemical products, helped.

Exports in the fourth quarter grew by 5.2 percent compared to the previous quarter. But compared to a year earlier, exports fell 2.5 percent.

"Last year's economic growth was better than the industry feared, but data confirmed private consumption remains weak," said Kim Yoo-mi, an analyst at Kiwoom Securities. "The data suggests it will be inevitable for the government to spend more to support the economy."

Kim said this year, economic recovery will be led mainly by exports as private consumption will only pick up slowly.

"Until nationwide vaccinations give the country herd immunity, there will be a gap between the growth of domestic consumption and exports," said Ha Keon-hyeong, a researcher at Shinhan Investment.