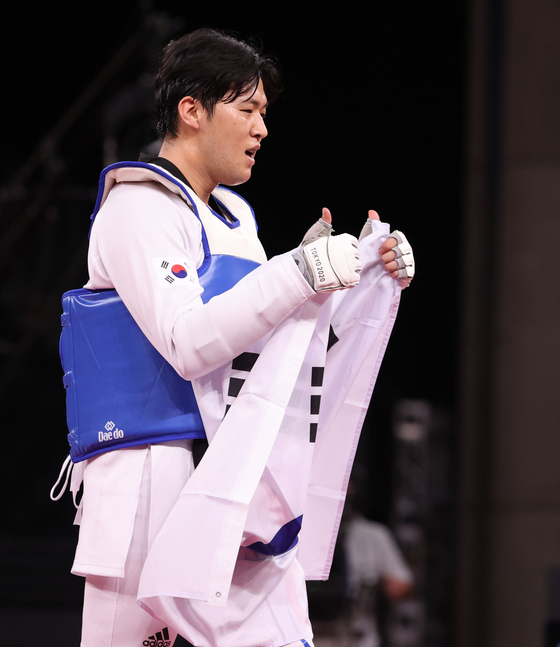 In kyo-don raises both thumbs up towards his coach after winning his bronze medal. [YONHAP]


In Kyo-don ended his journey in the 2020 Tokyo Olympics with a bronze medal.

The decider match was a close affair, but In managed to eke out a 5-4 victory against Slovakia's Ivan Konrad Trajkovic at the Makuhari Messe Event Hall, western Chiba, on Tuesday evening.

Things started relatively slowly. In went up 3-0 in the first round, then extended the lead by a single point in the second after Trajkovic landed on his hands and incurred a penalty. The third round invited a belated flurry of action, with Trajkovic going on the offensive and In trying his best to stall the game out.

Ranked second in the world just after Russia's Vladislav Larin in the men's +80kg World Taekwondo Rankings, In had come to the Olympics looking for gold, but missed out on the finals after suffering a 12-6 loss to North Macedonia's Dejan Georgievski earlier in the day.

Korea used to dominate the men's +80kg category in the 2000s, taking home gold at three consecutive Olympics, but has fallen off since, failing to make the finals in both London 2012 and Rio 2016.

In may leave Tokyo feeling like he missed out, but his medal-winning performance should still serve as inspiration for many, particularly considering his previous well-documented battle with lymphoma.