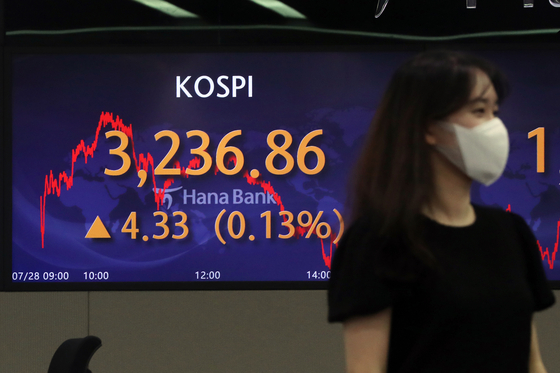 A screen in Hana Bank's trading room in central Seoul shows the Kospi closing at 3,236.86 points on Wednesday, up 4.33 points, or 0.13 percent, from the previous trading day. [NEWS1]


Stocks edged up Wednesday after a choppy session as hopes of strong corporate earnings pared investors' concerns about China's move to regulate tech firms. The won fell against the dollar.

The Kospi got off to a muted start as investor sentiment weakened after tech stocks plunged more than 4 percent in Hong Kong for a second straight session Tuesday.

After fluctuating in a tight range, the Kospi rebounded toward the session's close on strong second-quarter earnings by local large caps.

"Investors are worried that China's regulation of its tech firms and online education industries may spread to other industries," Eugene Investment & Securities analyst Huh Jae-hwan said.

"But the immediate negative impact [from China's move] seems to be coming close to its end," he said.

The local currency closed at 1,154.6 won to the dollar, up 4.5 won from the previous session's close.