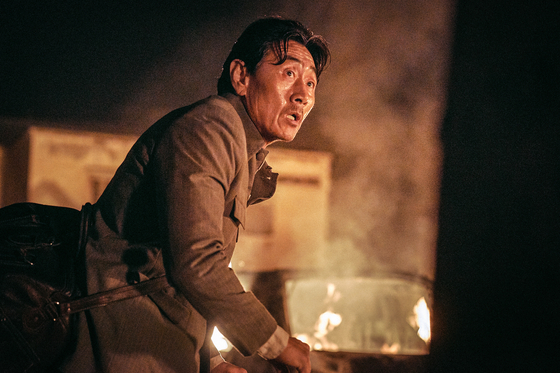 In Mogadishu, the capital of Somalia, in 1991, stranded North and South Korean embassy workers come together for the sole purpose of escaping alive from the ongoing war in the country.

At the press screening last week, Ryoo said he was intrigued by the project when it was first pitched to him by production company Dexter Studio. The director added that after doing his own research he became even more mesmerized by the real characters and what they had to endure to escape from Mogadishu.


“It was an extraordinary set of circumstances that the workers were in, and I racked my brains to properly portray the desperation, desolation, and the horror they felt,” Ryoo said. “We also tried to avoid overlooking the emotions of the individual characters because of the huge scale of the filming. I thought hard about how I could make the audience focus on the characters and their mindsets.”


The film was a turning point for the director in terms of his perception of North Korea, which he had previously formed while working on "The Berlin File.”


“After ‘The Berlin File,’ I heard some feedback that the audience couldn’t properly understand the North Korean accents,” Ryoo explained. “My takeaway from those responses was that the younger generation today view the country differently [from the prior generation]. [They see] North Korea as a different country and don't see they need to unify the two countries once again. When I was younger, I would frequently hear North Korean accents and their words via mass media. Of course, the country still frequently pops up in pop cultural references, but mostly to induce laughs for entertainment. What was interesting for me was that Mogadishu, our main stage of the event, is still a city still off-limits, but so is Pyeongyang in North Korea. So I believed that it was proper to view North Korea as an entirely independent, separate country for this film.”

Because Somalia’s Civil War is still ongoing, the film was shot in Morocco over four months in the latter half of 2019, before the Covid-19 pandemic. The Korea JoongAng Daily had the chance to interview the two actors who took on the lead roles, Kim Yoon-seok, who portrayed the South Korean ambassador Han Shin-sung, and Huh Joon-ho, who portrayed the North Korean ambassador Rhim Yong-soo. During the interview, the pair discussed their respective characters and the behind-the-scenes of filming overseas and working with hundreds of foreign actors. 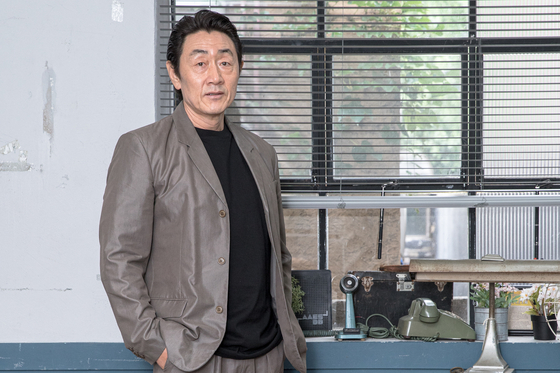 
Actor Huh Joon-ho had nothing but praise for the production team behind “Escape from Mogadishu.”

"I felt like I’ve had my share of experiences filming overseas and knew what to expect, but ‘Mogadishu’ was certainly something else,” Huh said. “From the breakfasts we had together in the morning to the evening discussions we had in our rooms, I felt that everyone — from the actors to the youngest members of our crew — was very committed, and everything was extremely well-organized. Usually when you go overseas to film, after few days everyone tends to loosen up, maybe get drunk together now and then. But for this film, I was surprised to see everyone remain entirely devoted to the project. I had plenty of time to study the script, and after a while I received a call from Kim Yoon-seok, telling me to come up to his room for a meal. We would be discussing the film, and then, we'd hear another knock on the door and it’s Zo In-sung. He would make coffee for us and we would chat again about work. It was a very peaceful time. We would get drinks now and then, but we never went over-the-top. We were pros, we were dedicated to our project, and I got to witness all of these exceptionally talented actors — Kim, Zo, Jeong Man-sik and director Ryoo — ardently discuss the film. Watching them was so much fun.

“I’m not just sugar-coating the experience because I’m promoting the film,” Huh emphasized. “I’m telling it as it is. Usually, there’s bound to be accidents by the second or third week, but for the first time in my career, the set was accident-free. So I applaud the ‘Mogadishu’ crew for their preparation. It was the realization of my dream set, and I feel like this is the beginning of a new chapter in our film history.” 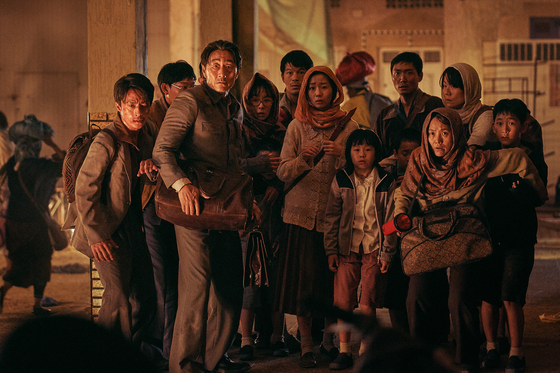 Actor Huh Joon-ho as the formidable but caring North Korean ambassador who works hard to protect his family and embassy workers. [LOTTE ENTERTAINMENT]


Huh remembers saying yes to the role of the North Korean ambassador even before he read the script.

“I met director Ryoo through my agency, and I remember we met up in a restaurant,” Huh said. “Ryoo introduced me to my role by explaining the story and said that the script was currently being revised. Strangely enough, there was something about Ryoo’s gaze that touched me. It was sincere.”

As for portraying Rhim Yong-soo, the formidable but caring leader of a group of North Korean embassy workers, Huh described the experience as filled with “anguish.”

“I personally don’t have the qualities in me to become a leader,” he said. “I can be impatient at times, but this man is a leader who strives to get every member of the group to safety. [...] I also thought of him as more flexible than his junior, counselor Tae Joon-ki [played by actor Koo Kyo-hwan] because he spent more time outside the regime. And I believe as he grew older, and as he spent more leisure time with his family overseas, he became more relaxed. To get into character, I made an effort to spend more time with the child actors on the set [who portrayed Huh’s grandchildren]. I personally became more relaxed as I grew older, so the formation of his character derived from my own experience and little bit of imagination.” 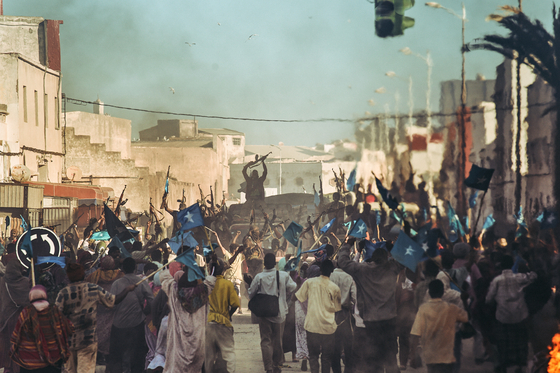 Director Ryoo Seung-wan’s 11th feature film was inspired by the true events of North and South Korean embassy workers who worked together to attempt to escape Somalia during a civil war. [LOTTE ENTERTAINMENT]


However, Huh admitted that he was constantly doubting himself and asking for advice from the director.

“I was always asking people if [my scenes] were all right to the point of being a nuisance, and monitoring the screen. I relied a lot on the director,” the actor explained.

The 57-year-old actor is well-known for freely crossing the boundaries between good and evil in his roles, and especially for the menacing aura he emits playing charismatic or evil characters. He recently portrayed the zombie of Lord Ahn Hyeon in the second season of Netflix’s “Kingdom” (2019-) series.

During the interview, however, the actor was all-smiles.

“As I grow older, every role and every project I work on is more precious,” he said. “I think of every day on the set as my last, and I’m just so grateful that people still think of me and cast me for their films. Working on films is becoming even more fun. I feel a little apologetic to those that work in film production for saying this, but the imposition of the 52-hour workweek in the film industry is more positive than negative, I think. Now I feel more obliged to thoroughly prepare my lines and roles because we are working by the hour. I’ve become more dedicated, and responsible, because I have more time to study the script [in my free time].”