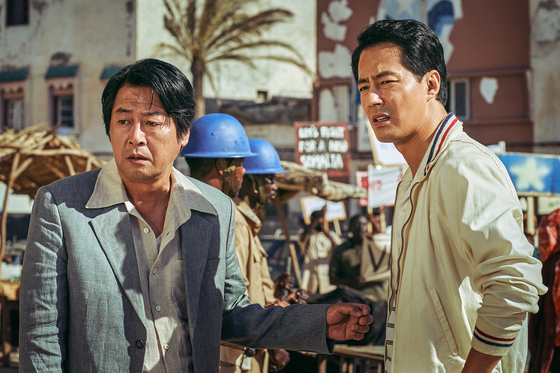 A scene from the film ″Escape from Mogadishu″ with actors Kim Yoon-seok, left, and Zo In-sung. [LOTTE ENTERTAINMENT]


Director Ryoo Seung-wan’s latest feature film “Escape from Mogadishu” topped the daily box office selling 126,000 tickets on its opening day on Wednesday, according to data from the Korean Film Council.

It marks the highest opening day ticket sales for any Korean film released this year, in spite of Level 4 social distancing guidelines, the highest in the four-tier system, which have been applied in the greater capital area since July 12. The previous high was achieved by “Hard Hit” which saw ticket sales of 55,000.

Based on the true events,  the film delves into the story of stranded North and South Korean embassy workers who join forces to escape Somalia during the civil war in 1991.

Other films released on the same day — “The Cursed: Dead Man’s Prey” written by director Yeon Sang-ho and Disney’s “Jungle Cruise” — ranked No. 4 and 5 in box office sales selling 28,000 and 25,000 tickets, respectively.